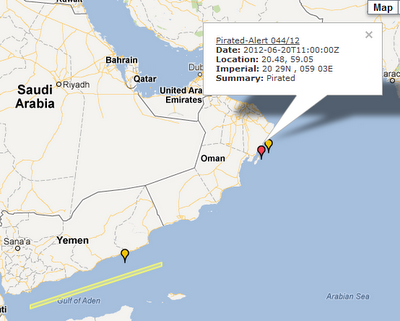 12.06.2012: 0520 UTC: Posn: 12:49.6N – 43:15.9E, Off Mauyyun Island, Red Sea.
Six skiffs with 3 to 8 persons in each approached a LNG Tanker underway at speeds between 14 to 20 knots. Weapons were sighted in three skiffs. The skiffs approached and started tailing the vessels stern at a distance of around 200/300meters. The onboard security team were deployed and they showed their weapons to the approaching skiffs resulting in the skiffs backing off. Over the next 2.5hrs the skiffs approached the vessel five times from port and stbd sides before moving away.

20.06.2012: 0505 UTC: Posn: 20:50.8N-059:30.2E (Around 35nm NE of Masirah Island, Oman), Off Somalia. Pirates in a dhow armed with guns fired upon a LNG tanker underway. Pirates were also armed with RPG. The dhow closed in to 50meters from the ship and fired shots from their guns, of which three hit the vessel. Master enforced anti-piracy measures and managed to evade boarding.

18.06.2012: 1105 UTC: Posn: 12:19N - 043:57E, Gulf of Aden. Six skiffs with 4-6 pirates in each skiff approached a bulk carrier underway at 25 knots from the stbd bow. Master raised alarm, increased speed, altered course and sent distress message. The skiffs attempted to close onto the vessel from the stbd beam and stbd quarter and one skiff tried to approach from the port bow. The onboard armed security team fired eight warning flares but the pirates continued their attempts. Weapons and ladders were identified in the skiff. After nearly 40minutes the security team fired six warning shots and the pirates aborted and moved away. A naval ship came for assistance.