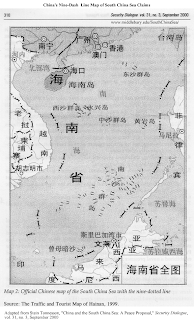 Floating under that tag will be a planned 350 or so ships which already are establishing themselves as a "presence" in what are hotly contested sea areas.

One such area is the portion of the South China Sea falling under the "nine dotted line," (see the nearby "Nine Dotted Line" map) sometimes referred to as "China's Cows Tongue" (see also China and the South China Sea: Back to the "Cow's Tongue").


Worries extend not only over the larger nation’s diplomatic claims over the region – claims in which China argues span centuries of maritime history – but in China’s increasing military strength in the region. At the heart of the problem is the aggressive newbuild strategy of the China Marine Surveillance (CMS) agency, a paramilitary maritime law enforcement agency created on 19 October 1998 under the auspices of China’s State Oceanic Administration and responsible for law enforcement within the territorial waters, exclusive economic zones (EEZ) and shores of the People’s Republic Of China. 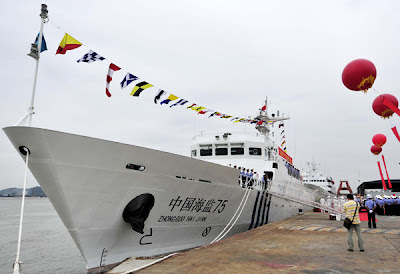 ***
Painted white with the English words, “China Marine Surveillance” emblazoned in tall blue letters across the sides of their hulls, the vessels being built for CMS are reminiscent of the great battleships built by the United States at the turn of the last century...
***
While the CM ships are relatively small, between 78 and 98 meters in length, and may be only lightly armed, they are certainly enough to intimidate fishing vessels and may prove effective in future actions against larger targets.
***
The CMS fleet has the proven audacity and speed to harass vessels of sizes ranging from small fishing boats to the 281 foot (85.78 m) USNS Impeccable, but unarmed fixed structures may be the primary target. Agency vessels are keeping a close eye on offshore oil and gas structures in the region and, in March of this year, CMS issued a press release citing the successful surveillance of “illegal exploration of oil and gas fields” in the South China Sea . . .

The gCaptain post goes on to note a report of a small Indian "convoy" being "welcomed" to the South China Sea by Chinese naval forces which then escorted the Indian vessels for several hours. Such a "welcome" might just be one way to let people know who the dominant power in the area is.

Using the combination of CMA and PLAN ships to "surveill" is damn clever way to assert maritime dominance.

A report on the CMS can be found at China Daily's
"Expansion of fleet to safeguard sea rights":


An SOA [State Oceanic Administration] official, who requested anonymity, told China Daily on Wednesday that the lack of ocean surveillance ships has hindered the country's ability to protect its maritime rights.

Sea disputes between China and other countries have surged in recent months.

Sino-Japanese relations have been strained since a collision between two Japan Coast Guard patrol boats and a Chinese trawler on Sept 7 in waters off the Diaoyu Islands in the East China Sea.

Beijing suspended all high-level contacts with Tokyo after Japan illegally detained the Chinese captain. China has since sent several fishery administrative ships to monitor the region.

In the South China Sea, Vietnam, Malaysia, the Philippines and Brunei all have competing claims over some Chinese islands.

US Secretary of State Hillary Clinton said in July that sovereignty issues in the South China Sea were a "diplomatic priority" for the US and proposed dealing with them in the international arena.

"The new ships (joining the fleet) can be interpreted as China's response to recent sea disputes," said Wang Hanling, a maritime law specialist at the Chinese Academy of Social Sciences.

One more thing to keep an eye on.

UPDATE: Salamander is on the case with a nice link to Professor Holmes at China’s Monroe Doctrine, which points out the differences in the current situation.

UPDATE2: About that "escort service" provided to the Indians from The Indian Express .
Indian Navy in South China Sea: Beijing’s unwelcome escort:


The PLAN’s challenge to India was presented in a typical and exquisite Chinese style. In ‘welcoming’ and ‘escorting’ the Indian naval unit, the PLAN was showing India its velvet covered fist.

The message is this: “nice to see you here, but you are in our territorial waters and within them there is no right to ‘freedom of navigation’ for military vessels. You are here at our sufferance.”