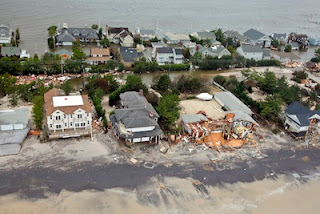 Here's a portion of a DoD press release on what is happening, found at DOD, FEMA, Other Agencies Aid Storm-affected Areas:


***
Secretary of Defense Leon E. Panetta has directed that the Department of Defense provide any available disaster response resources requested by FEMA and state authorities as states throughout the Northeast begin to recover from Hurricane Sandy, the FEMA release said.

DOD continues to coordinate with FEMA, U.S. Northern Command and the National Guard Bureau on providing lifesaving and life sustaining assets to FEMA and governors, as requested, the release said.
***
FEMA and the Department of Defense established Incident Support Bases in Westover, Mass., and Lakehurst, N.J., to pre-position supplies, including water, meals, blankets and other resources closer to potentially impacted areas, should they be needed and requested by states, according to the FEMA release. FEMA has moved roughly 245,000 liters of water, more than 174,000 meals and thousands of blankets and cots to Westover Air Reserve Base; and more than 400,000 liters of water and more than 390,000 meals and thousands of cots to Lakehurst Naval Air Station in Lakehurst, N.J., and more commodities are en route, as weather conditions permit.

States, localities and the American Red Cross continue to operate emergency shelters along the East Coast. In addition, the following federal activities are also being coordinated in support of Hurricane Sandy response and recovery efforts, according to the FEMA release:

-- The U.S. Department of Health and Human Services and FEMA activated ambulance contracts to support state requirements to evacuate patients as needed and requested. HHS has personnel deployed in support of state response efforts, including two 50-person Disaster Medical Assistance Teams providing triage and basic care in shelters in New Jersey. Additional medical teams are on alert. HHS also has personnel supporting 350 ambulances in New York that were activated through FEMA’s ambulance contracts. An additional Disaster Medical Assistance Team remains pre-staged in the mid-Atlantic, prepared to deploy quickly along the East Coast if needed.

-- The U.S. Department of Energy is working closely with FEMA, and in support of state and local officials who are responsible for working with utilities as they prepare for storms, deployed emergency response personnel to FEMA Regional Response Coordination Centers in Massachusetts, New York, and Pennsylvania, and additional personnel are on standby to assist. DOE is working with states and local partners as the electric industry engages in power restoration efforts.

-- National Voluntary Organizations Active in Disaster remains in close communication with the East Coast state VOAD's to coordinate on a regional, multi-state level. Currently 15 states have activated their VOAD networks for readiness actions; the National VOAD is sharing their activities and needs with all VOAD members and partners.

-- FEMA activated its National Business Emergency Operations Center. More than 330 representatives from retail, transportation, food and groceries, building management, and other industries receive daily briefings on key federal response efforts. These briefings assist in federal and private sector planning efforts, and provide a forum to discuss response efforts and challenges that may arise for maintaining business operations and provides the opportunity to collaborate on innovative solutions.

-- In preparation for the storm, the Nuclear Regulatory Commission placed inspectors in all nuclear power plants that could potentially experience impacts from the storm. Inspectors independently verify that plant operators are making the proper preparations and taking actions to ensure plant safety before, during and after the storm. Out of an abundance of caution, three reactors were shut down during the storm while another plant, Oyster Creek in New Jersey, is being closely monitored due to high water levels in its water intake structure. The NRC will continue to coordinate with other federal and state agencies prior to the restart of the affected plants.

-- The U.S. Department of Housing and Urban Development is coordinating with FEMA and affected states to identify housing providers who may have available housing units, including public housing agencies and multi-family owners. HUD is also speeding federal disaster assistance to New York and New Jersey to provide support to homeowners and low-income renters forced from their homes in the most heavily impacted areas. The president’s major disaster declarations for New York and New Jersey allow HUD to offer foreclosure relief and other assistance to some families in the designated counties.

-- The U.S. Department of Agriculture’s regional Food and Nutrition Service leadership is working with state commissioners and program administrators in the affected areas to meet food needs for emergency shelters and feeding sites and to assist with Disaster Supplemental Nutrition Assistance Program requests.

-- The U.S. Postal Service is prepared for a quick response before, during and after a hurricane, and it has procedures in place to expedite recovery efforts, including making sure there is timely delivery of mailed ballots.

State, Tribal and local officials make determinations and announcements about evacuations, according to the FEMA release. States, localities and the Red Cross have emergency shelters open in many affected communities. To find a shelter, people can download the Red Cross Hurricane app, visit the Red Cross web site, or call 1-800-RED CROSS (1-800-733-2767).
***

For those most affected by the storm, the arrival of assistance will seem too slow. As you can see, though, delivering aid involves a huge logistics problem and such things simply take time.

Help is on the way. There is a plan.

For those of you who may have missed it, a month or so ago we had a discussion about the military's NORTHCOM and the role in plays in disaster relief on Midrats in an interview with Brigadier General Donald A. McGregor, the Deputy Director of Operations for Domestic Operations, Headquarters, United States Northern Command, Peterson Air Force Base, Colorado. You can find the show at Episode 140: NORTHCOM and Disaster Response or at our iTunes page here, Episode 140.
Posted by Mark Tempest at 10/31/2012 12:10:00 PM