So, there's this ship, MV Rena, which managed to ground itself off New Zealand (see here) causing all sorts of issues and generally irritating nearly all who have become involved with her, due to an oil spill, her breaking apart and all that stuff, making her the cause of New Zealand's "worst ever maritime environmental disaster."

So, of course, it was decided that it would be a good idea to clear the remainder of the now former ship and a contract was let to do that.

However, perhaps in keeping with my newly formulated theory that the former MV Rena was a jinxed ship, more bad things have happened, this time at the hands of pirates of the Malacca Strait and as reported by the NZ Herald News, at Pirates latest blow to hit Rena salvage: 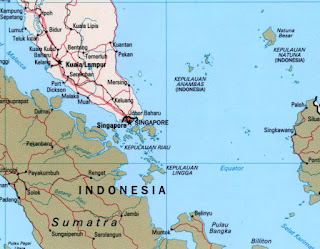 There have been ravaging storms, rotting cargo and equipment overboard - now marauding pirates are being blamed for hampering the salvage of the Rena.

It has been revealed pirates plundered $20,000 of equipment without being detected that had been on board the barge RNG280 as it set sail from Singapore to Tauranga.
***
Mr Leckey suspected the pirates had watched as specialised salvage equipment was being loaded onto the barge in Singapore about six weeks ago.

"We are still trying to figure that out. I was in the shipyard and we had packed them into containers so people must have seen us doing this."

The pirates are thought to have climbed on board the barge at night and broken into the containers as it sailed through the Strait of Malacca.
***

Among the booty were boxes of magnesium welding rods used for cutting steel, fuel pumps, and other equipment.

"I don't know what they are going to use it for, there are very [few] people who use it in the world," said Mr Leckey.

"What seemed pretty silly to us was that there was 3000 gallons of brand new paint sitting right beside the rods ... normally, if they were going to steal something, they would steal paint."

Incidentally, the raid came at the same time the company lost expensive gas-cutting gear that fell into the sea along with a chunk of the Rena.

"It was an unlucky day all round."