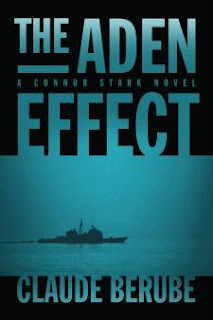 
Terror attacks on an American embassy. Piracy on the high seas. Political intrigue. Leadership at sea.

Not just the news of the day, but some of the topics you'll find in Claude Berube's new non-fiction book, The Aden Effect. We'll have the author with us for the full hour to talk about the book, writing, and perhaps a few more things as well.

Claude's articles have appeared in Orbis, Naval History, Vietnam History, Jane’s Intelligence Review, Naval Institute Proceedings, the Christian Science Monitor and other periodicals. He has worked on Capitol Hill and for the Office of Naval Intelligence. A lieutenant commander in the U.S. Navy Reserve, he has served twice overseas including a deployment to the Persian Gulf with Expeditionary Strike Group Five. He currently teaches at the United States Naval Academy.

From the description on of his new book on Amazon, "Murder, politics, seapower, Middle East instability, and intrigue in the White House are all part of this action thriller. Set against a background of modern piracy in the Gulf of Aden, the story begins as the new Ambassador to Yemen, C.J. Sumner, is assigned to negotiate access to the oil fields off the island of Socotra and enlist help countering pirates who are capturing ships at will off the Horn of Africa. Meeting with resistance to her diplomatic overtures, Sumner recruits Connor Stark, a former naval officer turned mercenary who knows the region, as her defense attache. When Stark sets up a meeting with the owner of a Yemeni shipping company and the ruling family, the challenges begin."