The Republic of Turkey, which has, for the most part, tried to stay clear of the Syrian disaster unfolding on its border, now has pushed further into the mess by following up on some intelligence and forcing an aircraft headed from Moscow to Damascus to land in Ankara and undergo a search. This investigation reportedly resulted in a veritable hit, as reported by the NY Times in "Turkish Leader Says Russian Munitions Found on Syrian Jetliner": 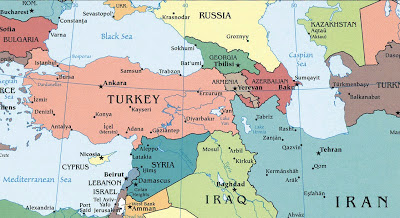 The Turks, saying they had acted on an intelligence tip, forced the Air Syria flight with 35 passengers aboard to land at an airport in the Turkish capital, Ankara, on Wednesday.

“From Russia, an institution equivalent to our Machinery and Chemical Industry has sent military tools, equipment and ammunition to the Syrian Defense Ministry,” Mr. Erdogan was quoted as saying about the plane inspection. He was drawing a comparison to Turkey’s Machinery and Chemical Industry Institution, or MKEK, a leading provider of defense equipment to the Turkish military.

“Upon the intelligence received, research there was conducted and it was unfortunately seen that there was such equipment inside,” Mr. Erdogan said.

Since the Turks have been exchanging intermittent artillery fire with Syrian forces, they might just be a little put out by anyone supplying more ammunition to the Syrian regime.

The Turkish Hurryiet Daily News has more, with a Turkish Foreign Ministry official sounding a little like Captain Renault from the movie Casablanca (bolded below and I mean that movie reference in a good way):


A civilian Syrian passenger airplane flying from Moscow to Damascus was forced to land at Ankara’s Esenboğa Airport late on Oct. 10, and some of the cargo aboard was seized due to intelligence that it included material in violation of international civil aviation rules. Turkey allowed the aircraft to take off and continue on its route after seizing its cargo and grounding it for nine hours.


Ankara issued a diplomatic note to the Syrian Consulate in Istanbul yesterday. “The plane’s cargo was inconsistent with its bills of lading, and the cargo may have had a military purpose. The receiver [of the cargo] was listed as the Syrian Defense Ministry,” a Turkish Foreign Ministry official told Hürriyet Daily News yesterday. The cargo has been seized, not confiscated as yet, but probably will be confiscated, he said. “We are not prepared to comment on the description of the cargo. We will discuss it after we finish examining it,” he said.

“We are determined not to allow arms supply via Turkish airspace to a regime that is resorting to cruelty against its own people. Trying to do so by using our airspace is unacceptable,” Foreign Minister Ahmet Davutoğlu said, a few hours after the plane landed, escorted by two Turkish F-16 jets. Turkish planes do not use Syrian airspace any longer because Syrian air space is not secure for Turkish planes, he said.

UPDATE: Syria call the Turks liars, according to the BBC:


Syria has accused Turkey of lying over its claim that a Syria-bound plane forced to land in Ankara was carrying Russian-made defence equipment.

Syria's foreign ministry challenged Turkish PM Recep Tayyip Erdogan, who made the claim, to show publicly the "ammunition" that had been seized.

Now, that's an interesting "good neighbor" approach taken by the Syrians. ... and the Russians who have joined in the name calling.