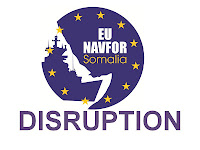 The EU warship, that was carrying out counter-piracy patrols as part of Operation Atalanta, had sighted the skiff carrying a ladder and up to 20 fuel drums 180 miles east of Socotra and immediately launched its helicopter to investigate. Once at the scene, the boarding team from San Giusto boarded the vessel and apprehended the men.

Speaking about the successful capture of the skiff, Rear Admiral Potts, who is the Operation Commander of the EU Naval Force said “This was the first sighting of a suspect pirate vessel in the Somali Basin for over 3 months and EU Naval Force got to it before it had a chance of carrying out an attack on ships transiting the area. Rear Admiral Potts added “We knew, as the monsoon period ended this month that pirates would try their luck at sea and this is why we have constantly warned against complacency. My message to the pirates is clear – we are watching you and we plan to capture you if you put to sea. Equally, this is an indication that pirates still intend to get out to sea and all involved in countering piracy, whether they are the military or industry must remain vigilant and prepared.

After gathering intelligence, the skiff was destroyed, thus preventing the suspect pirates from using it to attack ships in the future.

Somewhere criminal defense attorneys are becoming outraged that this action took place only on the "suspicion" of piratical intent. After all, there must be hundreds dozens many a legitimate explanation for carrying a ladder on a skiff at sea - perhaps one of the skiff crew's cat was stuck in a tree on an island . . .