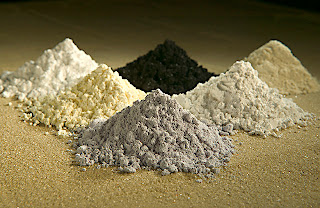 So, China had the world over a barrel because it dominates surface possession of valuable rare earth elements*, especially at the heavy end (dysprosium, terbium, europium, and ytterbium), which are vital to modern electronics and defense (China now mines about 95% of the world's supply) - and was using -um- "strong-arm" tactics in withholding said elements from non-Chinese end-users (see "China blocked exports of rare earth metals to Japan, traders claim").

This monopolist behavior has spurred, as it often does, innovation and exploration of alternatives to Chinese sourcing of rare earth elements.


Japanese scientists have found vast reserves of rare earth metals on the Pacific seabed that can be mined cheaply, a discovery that may break the Chinese monopoly on a crucial raw material needed in hi-tech industries and advanced weapons systems.
***
"We have found deposits that are just two to four meters from the seabed surface at higher concentrations than anybody ever thought existed, and it won't cost much at all to extract," said professor Yasuhiro Kato from Tokyo University, the leader of the team.
****
The latest discovery is in Japan's Exclusive Economic Zone in deep-sea mud around the island of Minami-Torishima at 5,700 meters below sea level. Although it is very deep, the deposits are in highly-concentrated nodules that can be extracted using pressurised air with minimal disturbance off the seafloor and no need for the leaching

Well, perhaps, but this article from an MIT website suggests that deep sea mining of rare earth elements may be difficult to mine from the ocean floor:


In order for deep sea mining to be implemented, suitable sites must be found. Deep sea remotely operated vehicles (ROVs) are able to obtain samples using drills and other cutting tools in order to analyze them for rare earth minerals. With the location of a suitable mining site, the ocean floor is ready to be harvested. Two technologies being considered for commercial mining of the ocean floor are continuous line bucket system (CLB) and hydraulic suction systems.
***
Environmental cost is currently the biggest issue with deep sea mining. There are numerous controversies about whether or not testing deep sea mining is worth the damage it could cause to biodiversity in the ocean. The first step towards making deep sea mining into a feasible option would be to ensure the protection of "sensitive ecosystems and minimize the potential environmental impact of this industry" (Terradaily). These environmental costs come primarily from the intrusive nature of mining. Deposits are located near deep sea thermal vents, which sustain very unique ecosystems. There are thousands of previously undiscovered species first seen around these vents, and many more presumably to be discovered. Many are filter feeders, and many fear that the sediment stirred up by mining activities may not allow them to obtain enough nutrients.

However, this problem is not be nearly as troublesome as it may at first appear. Sea floor deposits are much more concentrated than those on land, meaning a significantly smaller volume of earth must be moved to extract the same amount of usable minerals. Less materials consequently have to be processed, which is what causes most of the environmental problems in the first place. Also, current technologies are able to minimize the actual sediment being thrown about, mitigating enough of the initial concern to justify further usage of these techniques (Begley, 2010). The extremely rich deposits near these vents mean that mining in these areas is very economically viable, and the environmental costs are minimal enough to warrant a further application of deep sea mining.

Difficult or not, the Chinese have created a situation where the cost of not deep sea mining for rare earth elements might even be higher and more difficult.

Looks like there is enough potential to interest some big companies, as in Lockheed Martin:


UK Seabed Resources, a subsidiary of the British arm of Lockheed Martin, said Thursday that it has obtained a license to prospect for high-value minerals in a 58,000-square-kilometer area of the Pacific between Hawaii and Mexico.


The rare earth elements (REEs) are comprised of the lanthanide elements plus scandium and yttrium, which have similar physical properties and are often found in the same ores and deposits. Specifically, REEs include the light REEs (LREEs) such as lanthanum, cerium, praseodymium, neodymium, samarium, europium, and the heavy REEs (HREEs) gadolinium, terbium, dysprosium, holmium, erbium, thulium, ytterbium, lutetium, scandium and yttrium.