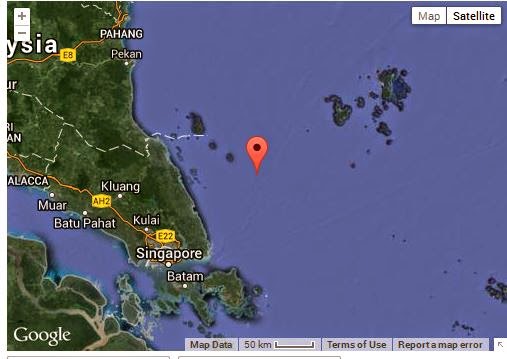 
Armed men who boarded a tanker in the sea off Pulau Aur, south Johor Sunday, shot dead a Vietnamese crew member and robbed the 16-man crew in what was described as the first fatality in Malaysian waters in two years.
***
The attack occurred about 5.30am while the asphalt-laden vessel was on its way from Singapore to Vietnam.


7.12.2014: 0530 LT: Posn: 02:15.15N – 104:49.30E, Around 20nm SE of Pulau Aur, Johor, Malaysia.
Seven armed pirates boarded an Asphalt tanker underway from Singapore to Vietnam. They checked the cargo, stole crew properties and left the vessel. After the pirates left the vessel the crew found the third engineer bleeding from his head. It appeared that he had been shot. The Master reported the incident to POCC Singapore and requested for medical assistance. A medical evacuation was carried out and the third engineer was admitted to a hospital where the doctors pronounced him dead. The remaining crew are safe and the vessel was boarded by the authorities for investigation. 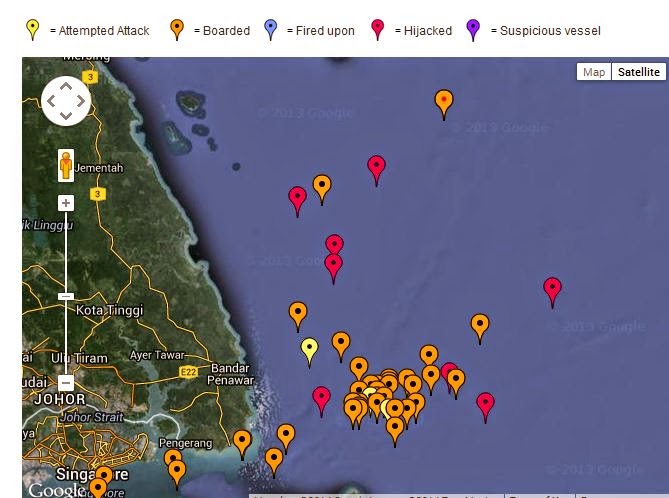 Nearby is a map, also from the IMB, showing attacks in the same area since the start of 2014. Every red marker on this map is a hijacked tanker of some sort.

While on this topic, a brief word of praise for the IMB's Piracy Reporting Center , which does a terrific job keeping track of piracy and armed robbery against shipping and seafarers worldwide. Noel Choong heads it up. It's an hugely valuable service they provide.
Posted by Mark Tempest at 12/09/2014 07:42:00 AM