Scott Cheney-Peters guests at USNI News and writes about The Expanding Assault on China's South China Sea Claims, citing what, in my opinion, is a typically mushy U.S. State Department document:


If you want to cut to the chase, skip all the early stuff and head directly for the conclusion, which notes:


China has not clarified its maritime claims associated with the dashed-line maps in a manner consistent with international law. China’s laws, declarations, official acts, and official statements present conflicting evidence regarding the nature and scope of China’s claims. The available evidence suggests at least three different interpretations that China might intend, including that the dashes are (1) lines within which China claims sovereignty over the islands, along with the maritime zones those islands would generate under the LOS Convention; (2) national boundary lines; or (3) the limits of so-called historic maritime claims of varying types.

How nice of the State Department to suggest China's possible intent, instead of just noting that China lack of clarification is good cover for its attempted "land and sea grab." 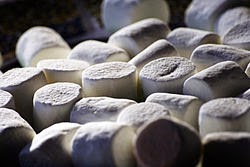 Then there is this powerful concluding paragraph:

You have got to be kidding.

China's "grab" is not, as China well knows, covered by the law of the sea. It is, however, in  "accord" with the law of the "biggest dog" taking what it wants. The acts of a bully pushing around its weaker neighbors while attempting to provide cover for its actions with a fig leaf of "legal right" ("we once sailed through these waters, therefore they are ours" or some such baloney).

State should have written: "China's claims are unmitigated B.S. and serve only as a cover for its attempts to take over the bulk of the South China Sea with flimsiest of excuses, to the detriment both of its neighbors and the freedom of the seas."

Sorry, State, the clarification that is needed here is one that says, "If you try to take the territory and maritime rights of our allies, we will not stand idly by."

I don't think pelting aggressors with marshmallows has ever deterred anything. How many more disasters will it take for State to figure out that weakness in the face of such action just invites more aggression?
Posted by Mark Tempest at 12/16/2014 08:55:00 AM