Ring Out a Warning 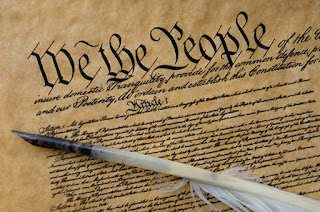 A few of us who spent much of our lives working to ". . . defend the Constitution of the United States against all enemies, foreign and domestic . . ." either on a full time or part-time basis have undertaken blogs and other activities to share our concerns over the dangers facing the country to which that Constitution belongs.

You will find some of the few of these "milbloggers" and fellow travelers over there on the right side of this blog. Some great milbloggers have moved on, others have taken up the torch.

Some of these concerns we discuss are over the actions, both potential or actual, of foreign nations. North Korea, Iran, China, and a couple of others come to mind.

Some anxiety arose with the increase in trans-national groups who have declared "war" on the United States and its form of government. Or, perhaps, on the "life style" of its people. Some more came with the increase in sea piracy off failed states - a threat that should have pointed out the vulnerable nature of sea-going global commerce and the need for strong naval forces to keep the sea lanes open and free. People simply don't know or forget how much commerce flows by sea.

Other concerns crop up because of what former and current military and civilian planners see as disconnects between the tools provided to war fighters (weapons systems - ships, airplanes and ground-pounder stuff) and the needs of the end users and the cost to the country. E.g. Is the F-35 worth the cost? Is the LCS worth anything as a warship? Three Zumwalt-class "destroyers" the size of a WWII battleship? Really? What about the A-10? Can bombing bring something like ISIS to its knees?

Questions are raised about the priorities of the Defense Department. CDR Salamander has a regular Thursday feature Diversity Thursday in which he documents the problems arising from a "diversity industry" which has levered its way into the DoD and made appearance seemingly more important than performance. Want a discussion about the failure of naval leadership and lack of trust in that leadership? See what the Skipper wrote.

Given this, it is with a great deal of interest that I read Sarah Hoyt's Ring The Bell about another question of priorities of the media and the powers that be. In her world, "ringing the bell" was to, in the words of the old "progressive" (read "coomunist") song, If I Had a Hammer:

Which song,according to the link at Wikipedia, was


The song was first performed publicly by Pete Seeger and Lee Hays on June 3, 1949, at St. Nicholas Arena in New York at a testimonial dinner for the leaders of the Communist Party of the United States, who were then on trial in federal court, charged with violating the Smith Act by advocating the overthrow of the U.S. government.

The irony, as you will see, is that Ms. Hoyt nails the media:


Our media by and large learned Marxism in their “best colleges” and therefore are blind to the dangers of totalitarian regimes of the left. And therefore haven’t been very good at sounding the alarm, even when the world-divorced philosophies of the left destroyed our society. They would have delivered us hand-tied to the Soviet Union if only the Soviet Union had been coherent enough to win.

Balked of their victory, they’d happily deliver us to ISIS even though, REALISTICALLY, they should oppose everything ISIS stands for, including oppression of gays and women.

BUT our elites REALLY don’t like us. They’re not going to ring the bell.

Sort of like listening to "For What It's Worth" in light of today's PC world:


Only it's step out of line and get an IRS audit. Or a bunch of protesters demanding your firing and proposing "re-education" for those who disagree with them and their world view.

Which gets me back to the defense of the Constitution including its amendments.

In sum, we need to continue to fight back against those who would "happily deliver us to ISIS." One of the best weapons is mockery of their self-righteousness, their priggery and their exceptionally shallow understanding of either freedom or the threats to it.

So, if the right to bear arms is important to you, engage in your First Amendment right to associate with others to reject efforts to restrict that right. Join the NRA. Write letters to your elected representatives. Call lying politicians liars.
Oh, and more of this: