Submarine Warfare Against Aircraft Carriers: Lessons the Chinese are Studying


The revelation that a U.S. Navy aircraft carrier group could be so vulnerable to a nuclear submarine did not make the mainstream media, and no mention was made by the many attentive defense analysts on this site, so it seems. However, the Chinese defense media does not miss much, especially concerning the capabilities of U.S. Navy carrier groups. In fact, a special issue of 兵工科技 [Ordnance Industry Science and Technology] (2015, no. 8) covered this “event,” featuring an interview with Chinese Submarine Academy professor 迟国仓 [Chi Guocang] as its cover story under the title: “A Single Nuclear Submarine ‘Sinks’ Half of an Aircraft Carrier Battle Group.” 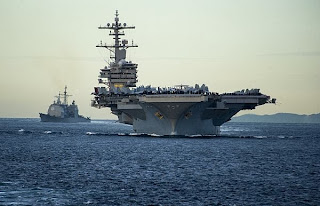 There are a whole bunch of caveats, but the need for strong U.S. anti-submarine warfare skills is certainly suggested by the article.