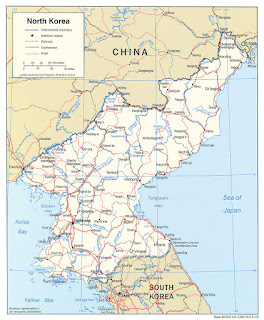 Interesting piece at The National Interest "Could North Korea Be the Next Energy Superpower?" which has the nice subtitle, "Pyongyang's advances in oil and natural gas could help fuel a still-ambitious military" which nicely sums up the strategic concerns raised. Of course, there is this -


However, the lack of recent reported investment suggests Western companies have been reluctant to invest in the totalitarian state, which remains subject to international sanctions over its nuclear weapon and ballistic missile programs from the United Nations, as well as from the United States, Britain, Canada, China and Japan.
***
The prospect of the North Korean military having access to plentiful new supplies of oil and gas will send shivers down the spine of governments from Seoul to Tokyo and beyond. Fortunately, it appears the regime’s goal of opening up its reserves appears just a pipe dream for now.

Perhaps their Iranian friends would like to try breaking some more sanctions because the NORKS would need all kinds of help to produce anything.