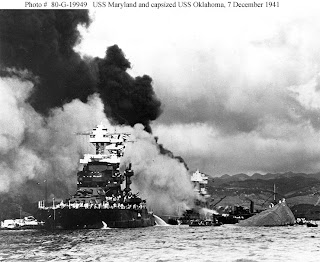 Excellent historical work at the Naval History and Heritage Command

Here, again, is an on the scene report as telephoned in from on scene Honolulu to the studios of NBC Radio:

My father and his brothers and my father-in-law were called to active duty shortly thereafter along with millions of other young American men. On the home front, some people were not allowed to join up due to the nature of their jobs. For example, my mother's brother worked for DuPont explosives and was not allowed to serve in the military. Women entered the work place to take up jobs that had traditionally been solely performed by men. Many also volunteered to serve in the military. Others took up important roles in the Red Cross.

It was a total effort.

Today many have no idea what a full mobilization would be like.

It also work remembering that after the attack, most of the ships sunk or damaged were raised, refitted and returned to the fight. See Sunday Ship History: After Pearl Harbor - Down but not out:

Of the six battleships of the U.S. Navy involved in the action, five had been either sunk or damaged during the Japanese attack on Pearl Harbor.

That's how to respond to attacks - pick yourself up and fight back.