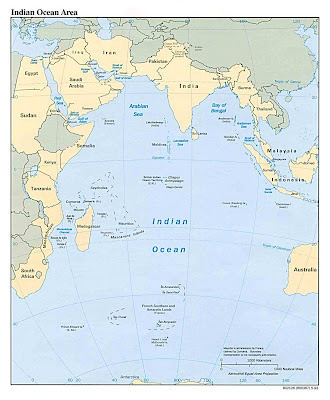 Some analysis of what China is up to in deciding to join in the anti-Somali pirate effort found at China plays maritime chess | The Japan Times Online:

Today, taking on pirates under the placard of internationalism offers China a welcome opportunity to add force to its global power ambitions. The antipiracy plank earlier made it handy for Beijing to agree to joint patrols with Pakistan in the Arabian Sea and extend cooperation to ASEAN. Another Chinese objective is to chip away at India's maritime dominance in the Indian Ocean — a theater critical to fashioning a Sino-centric Asia. If China can assert naval power in the Indian Ocean to expand its influence over the regional waterways and states, it will emerge as the preeminent Asian power.

The geopolitical importance of the Indian Ocean today is beginning to rival that of the Pacific. Much of the global oil-export supply passes through the Indian Ocean rim region, particularly through two constricted passageways — the Strait of Hormuz between Iran and Oman, and the piracy-plagued Strait of Malacca.

In addition, the U.S. wars in Afghanistan and Iraq and the nuclear standoff with Iran undergird the critical importance of the Indian Ocean region. Asserting naval presence in the Indian Ocean and expanding maritime power in the Pacific are part of the high-stakes game of maritime chess China is now ready to play. Its buildup of naval forces directly challenges Japan and India and impinges on U.S. interests.
***
There is a clear strategic shift under way in China on force planning. Historically a major land power, China is now putting the accent on building long-range maritime power to help underpin geopolitical interests, including winning new allies and safeguarding its energy and economic investments in distant lands. China has been in the lead in avariciously acquiring energy and mineral assets in Sudan, Nigeria, Iran, Venezuela, Burma, Chad, Equatorial Guinea, Gabon, Republic of Congo, Zimbabwe, Ethiopia and other states that have a record of showing scant respect for international contracts. Through naval power-projection force capability, Beijing intends to dissuade such states from reasserting control over Chinese-held assets.
***
India, with its enormous strategic depth in the Indian Ocean, is in a position to pursue a sea-denial strategy, if it were to adopt a more forward-thinking naval policy designed to forestall the emergence of a Beijing-oriented Asia. It has to start exerting naval power at critical chokepoints, in concert with the Japanese, U.S. and other friendly navies. In essence, that entails guarding the various "gates" to the Indian Ocean. More broadly, Japanese-Indian naval cooperation and collaboration have become inescapable.