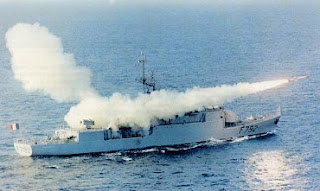 A French warship has thwarted an attack by Somali pirates on a cargo ship in the dangerous Gulf of Aden on a day when several cargo ships were attacked, the French president's office said.

The warship was patrolling the area Thursday as part of a multinational operation to protect commercial vessels passing through one of the world's most important sea routes.

The crew of the French "PM L'Her" dispatch boat intercepted two speedboats carrying eight Somali pirates as they were preparing to board a Panamanian cargo ship, said a statement that President Nicolas Sarkozy's office released late Thursday. The French navy will hand over the men to Somali authorities.

The French crew seized weapons and munitions from the speedboats, the statement said.

More on the characteristics of frigate PM L'Her here. An earlier article on her.

UPDATE: Fred Fry points to the photo of the capture and has more information here.