Iranian Ship With Weapons Cargo Under Inspection In Cyprus 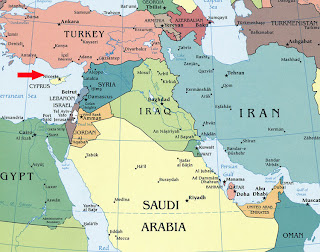 Iranian Ship With Weapons Cargo Under Inspection In Cyprus:

Authorities in Cyprus on Friday began searching an Iranian cargo ship earlier intercepted by a U.S. Navy anti-piracy ship and found to be carrying weapons.

The Cypriot inspectors remain mum about the cargo inside the Monchegorsk docked in the port of Limassol after arriving Thursday in Cyprus from Port Said, Egypt.

Last week, the Monchegorsk was sailing the Red Sea when it was intercepted by a U.S. Navy ship guarding the area against pirates. Artillery and mortar shells were found onboard in violation of a United Nations Security Council resolution banning Iran from selling arms.

However, the U.S. Navy let the vessel go without confiscating the weapons because there was no legal basis to seize the contraband. The U.S., instead, asked Egyptian authorities to inspect the vessel.

Quoting a European Union diplomatic source, it said Cyprus had acted after Israel and the United States requested that the Cypriot-flagged vessel be stopped.

Authorities contacted the ship and demanded that it dock in Limassol for inspection. Customs officials had unloaded part of the cargo and a large amount of weaponry, including artillery rounds and rockets, the paper said.

Israel believes the weapons were destined for the Lebanese Islamist guerrilla group Hezbollah or for Islamist Hamas militants in the Gaza Strip, Haaretz quoted Israeli sources as saying.

On Wednesday, U.S. military officials said personnel from the U.S. Navy vessel San Antonio last week boarded the Cypriot-flagged "Monchegorsk", a cargo vessel travelling from Iran to Syria, and found a weapons shipment but for legal reasons did not confiscate the cargo.

The officials declined to say what kind of weapons were found or how many. They also would not be specific about where or when the incident occurred.
***
Officials in Washington said the search was conducted as part of the U.S. Navy's normal maritime security role in regional waters that stretch from the Arabian Sea to the Mediterranean.

The U.S. officials said the arms could not be shown to violate U.N. weapons sanctions against Iran and the vessel was allowed to continue on to Syria.

The incident came to light amid media reports that the U.S. navy has been ordered to intercept suspected Iranian shipments to rearm Hamas following Israel's 22-day Gaza offensive against the Palestinian Islamist group Hamas.

The controversy seems to revolve around Un Resolution 1747, which reads, in part:

5. Decides that Iran shall not supply, sell or transfer directly or indirectly
from its territory or by its nationals or using its flag vessels or aircraft any arms or
related materiel, and that all States shall prohibit the procurement of such items
from Iran by their nationals, or using their flag vessels or aircraft, and whether or
not originating in the territory of Iran;

6. Calls upon all States to exercise vigilance and restraint in the supply, sale
or transfer directly or indirectly from their territories or by their nationals or using
their flag vessels or aircraft of any battle tanks, armoured combat vehicles, large
calibre artillery systems, combat aircraft, attack helicopters, warships, missiles or
missile systems as defined for the purpose of the United Nations Register on
Conventional Arms to Iran, and in the provision to Iran of any technical assistance
or training, financial assistance, investment, brokering or other services, and the
transfer of financial resources or services, related to the supply, sale, transfer,
manufacture or use of such items in order to prevent a destabilising accumulation of
arms . . .