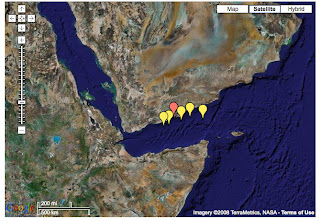 * 04.01.2009: 05:40 UTC: Posn: 13:3.0N – 048:42.5E, Gulf of Aden. Six pirates in one white coloured speed boat attempted to board a bulk carrier underway. Three of these pirates were armed with machine guns and opened fire on the vessel. Master carried out evasive manoeuvres and contacted a coalition warship. Within 15 minutes a helicopter arrived at the location. The speed boats moved away on seeing the helicopter. No injuries to the crew and no damages to the ship.

* 02.01.2009: 0807 UTC: Posn: 13:42N - 050:39E, Gulf of Aden. Pirates in three skiffs attacked a tanker underway. They fired upon the tanker and attempted to board. Master raised alarm, contacted coalition warships, increased speed and took evasive manoeuvres. A coalition helicopter arrived and the pirates aborted the attempt.

* 01.01.2009: 0337 UTC: Posn: 13:05N – 047:03E: Gulf of Aden. Two skiffs approached a tanker underway and opened fire with automatic weapons. Master increased speed and made evasive manoeuvres, and sent a distress message via VHF radio. A warship and a helicopter were sent to assist the tanker. Upon seeing the warship and helicopter the skiff moved away.