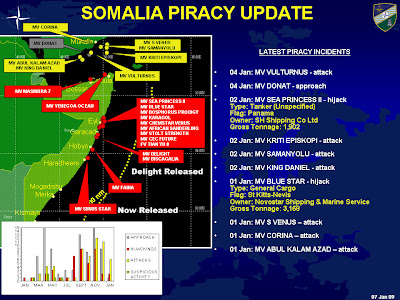 Following a quiet period during late December pirate activity increased significantly as the new year began. Two new vessels have been hijacked: MV BLUE STAR and MV SEA PRINCESS II were taken on 1st and 2nd Jan in the Gulf of Aden and have subsequently been moved to a position off the coast of Eyl and anchored IVO several other vessels awaiting release. As they arrived in the area the release was announced of Turkish vessel YASA NESLIHAN following the payment of an undisclosed ransom demand. Her 20 crew members are reported as safe and in good spirits.

The use of mother-ships seems to be on the rise, and potentially, vessels are hijacked with the sole intention of using them as such.

In short, the trends in latest piracy incidents are as follows: * Targeting larger cargo / oil / gas / chemical tankers * Approaches / attacks conducted from 2-3 small speedboats with 3-5 armed persons each. The number of boats involved in each incident seems to be increasing.

Based on recent release info, 13 vessels remain in pirate hands. I updated the NATO map to reflect the releases.