Crewmen fired high pressure water jets to fight off heavily armed Somali pirates trying to board a Greek oil tanker in the dangerous Gulf of Aden on Friday in the fourth such attack since the start of the year, authorities said.

The pirates in three speedboats and armed with guns and rocket-propelled grenades twice tried to board the Greek-flagged Kriti Episkopi but were scared off when the crew turned fire hoses on them and EU aircraft scrambled from a nearby EU naval flotilla to help, company and Greek government officials said.
***
The captain of the Kriti Episkopi spotted the speedboats just before 8 a.m. GMT approaching his ship and took evasive action to try to shake them off.
He contacted the Greek authorities who alerted the EU naval flotilla which swiftly scrambled an airplane and helicopter, the Greek Merchant Marine Ministry said.

"An aircraft and a helicopter reached the ship very quickly, which scared the pirates off," a ministry spokesman said, on customary condition of anonymity. "A frigate also sped to the scene. Everything now seems to be under control, but we remain vigilant."

The 29 crew members were unhurt and the tanker, carrying oil from the Persian Gulf to Greece, was not damaged in the attack off the pirate-infested Somali coast, said a statement by the ship's operating company Avin International. 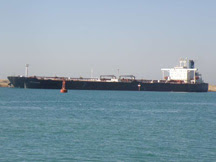