Highlights from the ONI Report:

Highlights from the ICC CCS Report:

* 13.01.2009: 0810 UTC: Posn: 12:24.5N – 044:57.7E, Gulf of Aden. One boat with six pirates armed with guns / RPG chased a container ship underway. Pirates open fire with RPG. Two warships in the vicinity provided assistance to the vessel. After half an hour the attack was abandoned. The Russian warship chased the pirate boat but was instructed by Aden control not to interfere. 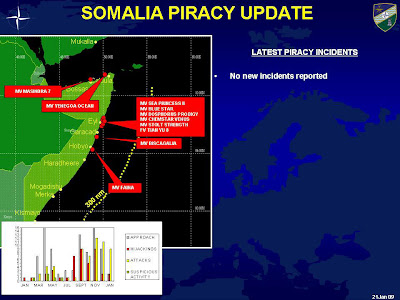 (Unclass) The lull in piracy continues with no new incidents confirmed in the past week. The last recorded piracy incident was the approach of MT DAYLAM on 14 Jan.
It is believed that a combination of inclement weather conditions and recent successes by the substantial coalition and international naval forces have resulted in the present inactivity.
Negotiations are believed to be well advanced for BISCAGLIA and she may be released soon. 10 vessels remain hijacked
Japan and South Korea have agreed in principle to send naval anti piracy forces to the region in the near future.