Pirates of the highways 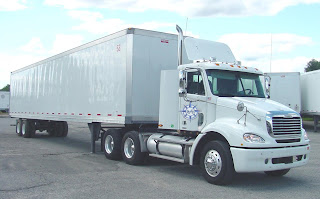 Cargo thieves will take anything -- a load of bubblegum, chicken beaks and feet, wedding dresses. Last weekend, someone stole a tractor trailer full of eggs from a Mississauga yard. The empty truck was recovered in Scarborough yesterday.

In 2008, thieves stole $22-million worth of goods in Peel Region. With its vast industrial yards, its circuit of highways and its proximity to Pearson International Airport, Peel is considered by some in the industry to be the cargo theft capital of North America.

Across the GTA, thieves are becoming more organized, and striking more often.

"The police don't have enough manpower to deal with the situation any longer. They need help. We're dealing with organized crime.
***
"After stealing a tractor trailer full of merchandise, if they get caught, if they are found guilty, the charge is theft over $5,000. That's it. They can steal at will and the reward is greater than the punishment.''

Cargo theft is estimated to cost the U.S. $15-30 billion a year, though the true measure may be even higher, since some businesses are reluctant to report thefts out of concern for their reputations or their insurance premiums. Thieves' methods vary, but the outcome is generally the same—a load of merchandise leaves Point-A and never arrives at Point-B.

"Cargo theft is our number-one priority in Major Theft," says Unit Chief Eric B. Ives, who heads the Major Theft Unit in the FBI's Criminal Investigative Division. "There's never been a time when there's not enough work."

The issue is much broader than a criminal stealing a TV off a truck. In the past few years, investigations have revealed more and more sophisticated operations with well-organized hierarchies. The typical "criminal enterprise," as Ives describes it, has a leader who runs a regional or national operation. Beneath him are cells of thieves and brokers, or fences, who unload the stolen goods on the black market. "Lumpers" physically move the goods, along with drivers. And there's usually a specialist who is expert at foiling the anti-theft locks on truck trailers.

Cargo thieves heist whole truck loads of merchandise—the average freight on a trailer is valued between $12,000 and $3 million. The hotspots are where you might expect—truck yards, hubs for commercial freight carriers, and port cities.

The U.S. penalties are a little steeper thanks to the Patriot Act:

In fact, private industry played a pivotal role in placing a long-sought provision in the USA Patriot Improvement and Reauthorization Act, signed into law in March. The provision requires the Department of Justice to add cargo theft to the FBI's Uniform Crime Reporting (UCR) System by year's end. Cargo-related crimes that were once filed in the UCR as burglary, larceny, and robbery will have their own category. Once established, the data will paint a clearer picture of the extent of cargo theft—and help law enforcement agencies allocate their resources. The measure also increased prison terms for cargo theft convictions: three years for cargo valued under $1,000 and 15 years for cargo valued over $1,000.