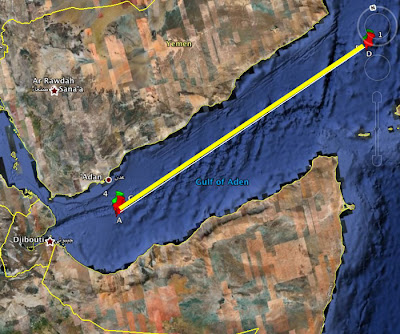 From Lloydslist.com - New transit lane for Gulf of Aden:

As of February 1, the existing Maritime Security Patrol Area — introduced by coalition navies last year as a safe passage corridor — will be replaced by two separate five-mile wide eastbound and westbound, separated by a two-mile buffer.

The shake-up comes on account of the increase in number and repositioning of warships in the region, and is also designed to reduce risks of collisions.

As a result, the eastern and western boundaries of the so-called high-risk area, agreed by the joint owner-union International Bargaining Forum last October, will be adjusted accordingly.
***
The new eastbound lane will begin at 045°E between 11°48’N and 11°53’N, be oriented along a straight line course of 072°, and will terminate at 053°E between 14°18’N and 14°23’N.

The hisk risk area will be adjusted to meet the mouth of the new corridors, with the western border running from the coastline at the border of Djibouti and Somalia to position 11°48’N, 045°E; from 12°00’N, 45°E to Mayyun Island in the Bab El Mandeb Straits.

UPDATE: Ask and ye shall receive from Ken Adams: 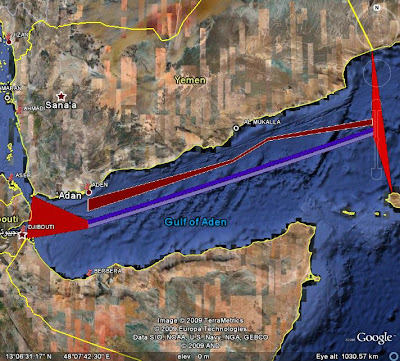