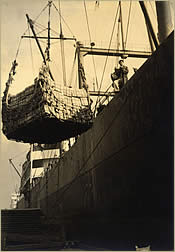 A simple idea that changed the world as reported here:

They are simple steel boxes, 20 or 40 feet long and 81/2 feet high, with a pair of doors at one end and a wooden floor - truck trailers without wheels.

Who would have thought such an ordinary creation would change the world?
The cargo container has done just that, transforming the global economy in ways comparable to the telephone and the jet plane by making the world a little smaller.

By dramatically increasing the efficiency of, and reducing the cost of, cargo transportation, the container has expanded markets for both U.S. and international goods. Now, it's commonplace to find Japanese televisions, Chinese clothing, Swedish furniture and German beer on American store shelves.

The box altered the future of nations when manufacturing operations, chasing lower labor costs, sprouted throughout Asia, particularly in China.
***
Malcom McLean, the owner of a North Carolina trucking company, launched the world on the path toward containerization and ultimately globalized the global economy.

He didn't invent cargo boxes, but he did refit the first ship to carry containers . A variety of interchangeable metal cargo boxes had been tinkered with by various companies - mainly railroads - since at least the late 19th century, according to Levinson, a former editor at The Economist magazine.

McLean overcame the financial and regulatory hurdles that caused others to stumble in their attempts to establish a useful container service. He was determined to make containers succeed, believing that growing highway congestion, plus road taxes and tolls, threatened the future of his successful trucking business, according to "The Box That Changed the World," written by Arthur Donovan and Joseph Bonney.

McLean bought a shipping line and grew it into what became known as Sea-Land Service, which now exists as parts of the Danish shipping giant Maersk Line and the smaller U.S. carrier Horizon Lines.
***
With containers, cargo could be packed once at the factory and unloaded once at the final destination. Along the way, that box might be carried by trucks, trains or ships. With the more efficient containers, labor costs plummeted because fewer workers were needed on the docks, on ships, in warehouses and on the railroads. Theft and damage also declined because the cargo was securely locked in the box.

The cost of shipping goods worldwide now accounts for 1 percent or less of retail prices, according to "The Box That Changed the World." For example, it costs roughly 34 cents to ship a pair of shoes that sells for $45 in an American store from an Asian factory. And it costs about $12.50 to import a television that costs $2,500. 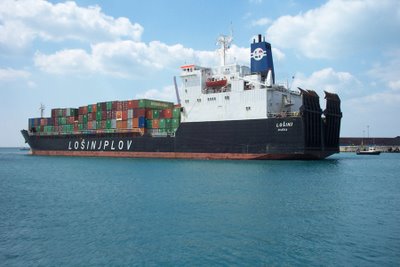