StrategyPage seems to think the alleged Iranian "stealth missile" is an Iskander E as reported here.

Maybe. The SS-26 has been described as a counter to the US Theater Ballistic Missile Defense systems. The system is described as:

The launch installation has two missiles with a range of 280 kilometers. Each missile has a 480 kilogram warhead consisting of 54 elements. The system can be used against small and large targets. The Iskander missile can easily overcome air defense systems. It's almost impossible to prevent a launch of an Iskander missile because of the system's mobility. Targets can be found not only by satellite and aircraft but also by a conventional intelligence center and by a soldier who directs artillery fire. Targets can also be found from photos, which will be put into a computer by means of a scanner. The self-direction device functions even in fog or darkness. Only the Iskander system can accomplish such tasks. The United States has tried to reconsider the missile technology control regime and here arises the question whether this may be an obstacle for the sale of the new missile abroad. Such missile systems as Iskander have a special place in the world weapons market. Even a small amount of such missiles drastically changes the balance of force in conflicts.

Some experts discount the Iranian missile but do point out the similarity to the Iskander E, as here:

He said the description "fits almost word-for-word the way the Russians describe the Iskander-E, with one exception -- the Russians don't claim the capability to '‘hit several targets'’."
Rubin said that the Iranians could mean the rockets had so-called "clustered warheads", which is not something the Iskanders have.
The Iskander-E, also known as the SS-26, has a range of around 300 km (186 miles) and is extremely accurate, according to the Federation of American Scientists Web site (www.fas.org).
The Web site of the Nuclear Threat Initiative (www.nti.org), a U.S. think-tank, cites Russian media reports from April 2001 as saying that Iran was planning to purchase Iskander-E missile systems from Russia.
To the annoyance of the United States and European Union, Russia has made it clear it is willing to sell small-scale defensive missiles to Iran. Late last year, Moscow agreed to sell Iran tactical surface-to-air missiles that could be used to shoot down low-flying aircraft or guided missiles. 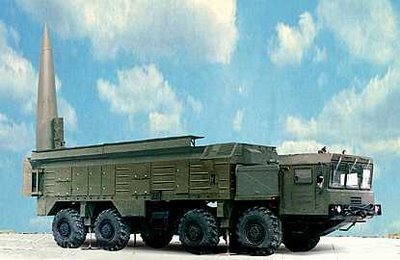 After paying lip service to the value of the Iskander as an anti terrorist weapon (“A group of bandits hiding somewhere, in the forest, a gorge or mountains can be hit by just one missile” in the words of Chief Designer Oleg Mamalyga), the TV program went down to brass tacks. The Iskander was attributed with the following countermeasures:
a. Boost phase maneuvering.
b. Depressed trajectory (Apogee of 50 Km rather than app. 70 Km)
c. Low radar signature, achieved by “a special composite”
d. Terminal phase maneuvering.
While the efficacy of those countermeasures could be debated, two remarkable facts stand out: First’ that the Russians took the trouble to build countermeasures into a missile which is supposed to hunt “bandits hiding somewhere”, and second that they chose to advertise the list of those countermeasures in the most public of public domains. “Bandits” seldom own missile defense systems; as a rule, missileers are wary of showing their hands regarding their countermeasures. The Russian’s bout of transparency can be interpreted in one way only: The Russian TV program was a thinly veiled marketing show, dangling the Iskander in front of customers who face Theater Missile Defenses (TMD), or are likely to face them soon.

The most obvious targets of this marketing campaign are Syria and Iran. Syria confronts Israel’s Arrow/Patriot missile shield, and a Patriot busting Theater Ballistic Missile (TBM) like the Iskander would be particularly appealing. As for Iran, the advantage of US Patriots in Iraq and Kuwait could conceivably be overturned by Russian supplied Iskanders, which have the range to hit both Baghdad and Kuwait City from Iranian territory.