Hyundai Fortune fire update: What was in the box? 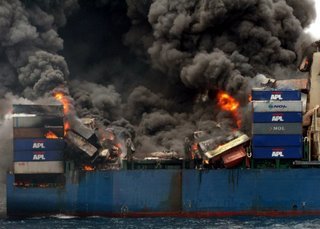 Marine investigators are combing through the blackened Hyundai Fortune to find the answer to a multi-million dollar question: What was in the box that caused a blaze so ferocious that it engulfed the stern of the vessel in minutes?

A series of explosions in the cargo compartments behind the bridge structure started below deck, sources told Cargonews Asia, and all but destroyed the vessel's stern section that was loaded with up to 1,000 containers.

Terrorism has been ruled out by investigators who said the results would have been more devastating. The unfortunate Hyundai Fortune was carrying seven containers of fireworks belonging to a Hong Kong manufacturer and destined for Hamburg and Le Havre, but it could not be confirmed if the boxes were affected by the blaze.

The fire, which almost sank the fully-laden 5,551 TEU vessel 120 miles east of Aden late last month, has again raised concerns over incorrectly stored and declared hazardous cargo. Explosions on containerships trading with Asia, and in particularly carrying cargo from China, have become increasingly commonplace in recent years. The dramatic pictures of a "fireworks display" on the 4,300 TEU Hanjin Pennsylvania in the Indian Ocean in late 2002 brought to public notice concerns over the carriage of hazardous cargo originating from places that may not have understanding, or be willing to understand, the legalities surrounding the transport of dangerous goods.

And just two months ago, the 3,100 TEU MOL Renaissance caught fire, also in the Gulf of Aden, and was turned away from the port of Aqaba while in distress because it was seen as a hazard.

The fire on board the Hyundai Fortune appears to have started in a container stowed close to the ship's engine room, a site with obvious heat emission. Only close examination of the packaging of that container will prove whether it contained any dangerous or hazardous cargo.

One Asia shipowner commented: "We are seeing an increasing number of cases where shippers and consignees either deliberately flaunt the internal laws regarding transportation of dangerous and hazardous cargo, or chose not to acknowledge worldwide requirements."

TEU "Twenty-foot Equivalent Unit" is defined as a volume equivalent to that occupied by one ISO twenty-foot container.

UPDATE: if you aren't paranoid enough about containers yet, you might be interested in this older post on "container switching" by smugglers in Southeast Asia...
Posted by Mark Tempest at 4/13/2006 09:29:00 AM