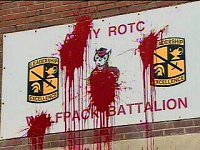 Vandals sprayed anti-war messages early Wednesday on ROTC buildings on the campuses of North Carolina State University and the University of North Carolina at Chapel Hill, authorities said.
An Army ROTC building near Reynolds Coliseum at N.C. State bore the message "ROTC trains murderers" and asked people to resist "the racist war." The vandalism was reported to campus police at about 7:30 a.m.
"This is definitely not a racist war, and we don't see ourselves as murderers," said Maj. Jeffery Robertson, an ROTC leader at N.C. State who has served tours of duty in both Iraq and Afghanistan.
"ROTC is not all about training warriors. There's a lot of civilian jobs that are done through the military that help this country run. I think it's sad that people can write stuff like that and get away with it," sophomore ROTC member T.J. Duvall said.

What a typical chicken poop act by a coward or group of cowards who lack the courage to engage in public debate. Who lack the intelligence to grasp the fact that ROTC students are all volunteers who serve so that others might be safe. Who lack the smarts to make up original slogans. Who are so cowardly that they attack unprotected buildings in the middle of the night.

Over the decades, thousands of outstanding young men and women have passed through the doors of the ROTC buildings at Chapel Hill and in Raleigh. Men and women of character, courage and conviction. The slimeballs who marred the exterior of those buildings will never be able to lay claim to any of those honorable adjectives.

Hat tip to Black Five (from whence the UNC photos came thanks to Nora, a UNC alum and mother of a ROTC cadet- to see the photos of the UNC Amory larger, go to Black Five).

UPDATE: 4/28/06 - Daily Tar Heel (UNC student newspaper) reports the incident at Chapel Hill was the second in a couple of weeks at the Naval Armory:

Wednesday's incident was the second act of vandalism at the Naval Armory in recent weeks.

On March 11 a stencil of a crossed-out bomb was painted on the stairs of the building. Damage was estimated at $100, according to police reports.

There are roughly 130 cadets and midshipmen at UNC-CH, and about 25 enlisted and officer personnel work in the building.

And could a couple of the comments at this site be considered gloating? or active encouragment?
Posted by Mark Tempest at 4/26/2006 10:00:00 PM