The war in the Horn of Africa 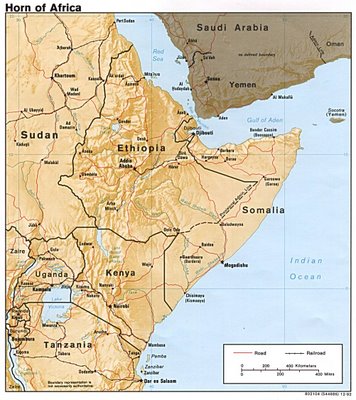 Excellent report on the US military addressing issues in the HOA -: Admiral Cites Complexity in Horn of Africa Mission:

The command includes Djibouti - where the headquarters is - Ethiopia, Eritrea, Sudan, Somalia, Kenya and Yemen. It is an area two-thirds the size of the continental United States with 181 million people.

The command was originally conceived as one that would block terrorists from coming into the region once their safe havens in Afghanistan and Iraq were gone. "The mission morphed from direct action to doing theater security cooperation," Hunt said during a recent interview. This overall term includes civil military cooperation, humanitarian assistance, military-to-military training, and capacity building to improve regional security.

On the military side, this embraces border security, maritime security, and training units to handle things at a national level.

But this is a huge region facing a potential humanitarian disaster, and one four-man Army civil affairs team in Ethiopia handles an area the size of Connecticut. And the region has almost the same coastline as the U.S. eastern seaboard.
***
The task force's area of operations has political challenges as well. When Eritrea and Ethiopia fought in the late 1990s, some 100,000 people were killed. The two countries are once again facing off against each other. "If that gets hot, I just get consumed doing things like doing (a noncombatant evacuation) and providing support in that area," Hunt said.

The genocide in Darfur is in the region. The civil war in Sudan - while nominally over - still has pockets of fighting. Terrorists and homegrown "liberation fronts" also pock the area. And in the midst of this is Somalia - the largest ungoverned area in the world. Some warlords in Somalia have adapted a Taliban-style government, and others are flirting with al Qaeda and al Qaeda influenced groups.

"We have human trafficking, smuggling of drugs and arms between Yemen and Somalia," Hunt said, "and in the south, the beginnings of extremist activity."

"The size and complexity of the region is just unbelievable, and drought and disease make this puzzle even more difficult," he said. "But we have had successes, and we can capitalize on them."

Facing all this complexity are about 1,500 combined joint task force members in Djibouti and another 500 "outside the wire" doing projects.
***
Once conditions settle in Afghanistan and Iraq, Hunt said, he fully expects terrorists to try to escape to the Horn of Africa. "That requires us to be ready, to see these things coming and adjust resources accordingly," he said.

The key is helping Africans to help Africa. "I went out with (representatives of the U.S. Agency for International Development) and visited a place where UNICEF is trying to save 'very distressed' children under 5 years old - they were trying to build them up with high-protein diets and try to monitor their condition," Hunt said. "That's an end-game kind of thing - a response to an emergency - and we spend lots of resources on that. What we want to do is get aid in early and help the people develop their capabilities so we don't have to have emergency relief to stop children from dying.

"Food aid just teaches people to stand in line," he said. The joint task force has humanitarian teams in the region looking to build sustainable economies. They are working with the people to develop resources. And they are working with local, regional and national authorities to build the capabilities of the region.
***
In the maritime domain, Hunt said, the command has a good working relationship with the U.S. 5th Fleet and Combined Task Force 150. Crime on the seas and piracy are problems that could be costing people in the region billions. "Every single official I speak with expresses concern about criminal activities on the sea and how it impacts them," he said.

Nothing is more important, Hunt said, than recognizing that success in the region requires interagency cooperation. "We need to bring all elements of national power together," he said. Working with embassy teams, reaching back to U.S. Central Command in Tampa, Fla., and to federal agencies in Washington will help. The bottom line, though, is the area needs "sustained, long-term leadership from the interagency process," the admiral said.

Speaking of CTF 150, it has a new boss as reported here: 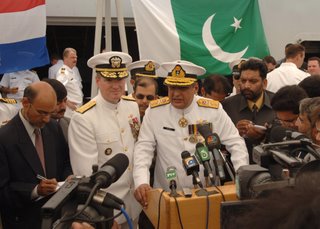 The change of leadership marks the first time an officer of a regional nation has assumed command of any of the three coalition task forces that comprise the Combined Maritime Force.

“I, my team, and the Pakistan navy feel elated and honored for being entrusted with this important, professional responsibility,” said Iqbal during his acceptance speech. “Terrorism is a worldwide phenomenon which has become an enormous challenge for the international community. Given the transcending nature of terrorism and its magnitude, it's not within the capacity of one single country or force to address this issue.

“[We require] a joint approach to address this menace,” he said. “Command of Task Force 150 is a challenge, [but] I and my team are confident that with the support of our coalition and regional partners…this challenge can be converted into opportunities for the benefit of all.”

“Today we’re the most experienced navy in the region, and have the honor of being the only non-North Atlantic Treaty Organization (NATO) country to be entrusted with the responsibility of commanding a coalition comprising mostly of NATO countries,” he said.

CTF 150, established near the beginning of Operation Enduring Freedom, is currently comprised of naval forces from France, Germany, Italy, Pakistan, the United Kingdom and the United States. The task force conducts maritime security operations (MSO) in the Gulf of Aden, Gulf of Oman, the Arabian Sea, Red Sea and the Indian Ocean.

And an example of some of the "little things" that the forces in the HOA are doing: 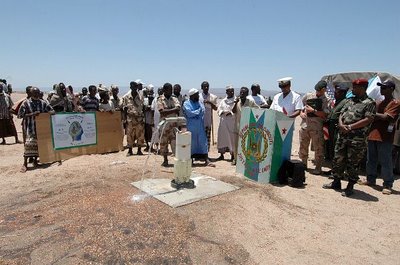 Commisar of the Dikhil region of Djibouti, Africa, Mr.Moussa Djama, addresses the crowd during a well dedication as Lt. Col. Rudy Plug, of the Royal Netherlands Army (RNLA) and Deputy Chief of Staff, Combined Joint Task Force-Horn of Africa (CJTF-HOA) and local official look on. The well was dug by Army engineers assigned to CJTF-HOA, which is headquartered at Camp Lemonier in Djibouti, Africa. U.S. Navy photo by Photographer's Mate 2nd Class Scott Taylor (RELEASED)