Glad they noticed: Ports are vulnerable 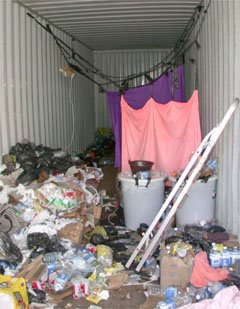 Living proof that our ports are too vulnerable arrived in Seattle in a shipping container this week from Shanghai: 22 Chinese nationals traveling as stowaways in a container that typically carries toys, furniture, bikes and computers.

Defenders of the status quo will say: Look, the system worked. The illegal visitors were discovered by a security guard as they wandered Port property. Additionally, the container they traveled in was flagged for later inspection because it weighed less than expected. But how many other smuggled foreigners have gotten into our country undetected?

Authorities believe this was an organized human smuggling ring whereby new arrivals paid thousands of dollars for passage to the U.S. What if the container held something more dangerous than illegal immigrants, such as a group of terrorists or a dirty bomb?

Why doesn't the U.S. use available technology to prevent such a shipment from occurring before it happens? Doesn't that make more sense?

Washington Sen. Patty Murray has been pressing for years to enhance port security. Bolstering port security is a good idea in a post 9/11 world.

Democrat Murray and U.S. Sen. Susan Collins, Republican from Maine, have proposed the GreenLane Maritime Security Act to better track and secure goods shipped from overseas. Their legislation would require use of radiation and X-rays for participating companies in foreign ports to assure goods listed on the manifest match the actual contents in the container. It would require sealed containers with alarms that go off if the seal is tampered with or broken.

The GreenLane Maritime Cargo Security Act (S. 2008), recently introduced by Senators Susan Collins (R–ME) and Patty Murray (D–WA), has numerous laudable objectives. These include increasing security for cargo and seaports, minimizing closures of U.S. seaports in case of an accident or attack, providing layered secu rity in the supply chain, “pushing out” U.S. borders, and focusing resources on suspect cargo. How ever, the legislation as written also contains provisions that should be removed or modified.