Iran: The Missiles of July 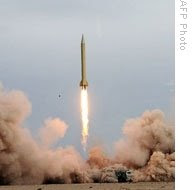 Nicely covered by Steeljaw at The Missiles of Summer - Updated.

Secretary Gates indicated that the Iranian test demonstrated enhanced capability for the country's Shahab Three missile, but he said he could not provide details. Previous versions of the missile are believed to have a range of about 2,000 kilometers, enough to reach from western Iran to the western shore of the Black Sea.

Secretary Gates says the test provides evidence to support the U.S. view that Europe needs a system to defend against Iranian missiles.

"This certainly addresses the doubts raised by the Russians that the Iranians won't have a longer range ballistic missile for 10 to 20 years," said Robert Gates. "The fact is they just tested a missile that has a pretty extended range. So, my view, in the first instance, is we've been saying, as we've talked about missile defense in Europe, that there is a real threat. And it seems to me that the test this morning underscores that."

Add in this: Iran's missiles are just for show:

As a political statement, the missile test was impeccable - delivered the exact same day the leaders at the Group of Eight meeting in Japan were calling for Iran to suspend uranium enrichment, to which it has a right under the nuclear Non-Proliferation Treaty to which it is a signatory.

Then there are the internal, rhetorical cross currents - a very delicate ballet. The head of the Iranian air force, General Hossein Salami, said Iran is very much aware of "enemies who in recent weeks have threatened Iran with harsh language". According to the Iranian press, Salami also said, "Our hands are always on the trigger and our missiles are ready for launch."

Predictably, the US government dubbed the test "a threat" - as if Washington and Israel had been sending love letters to Tehran lately.

Brigadier General Mohammad-Najjar was much more conciliatory. He made it clear "our missile capacity is just for defensive purposes, to safeguard peace in Iran and the Persian Gulf region ... Our missiles will not be used to threaten any country, they are only intended for those who dare attack Iran".

And all this happened only one day after Ali Shirazi, Iran's Supreme Leader Ayatollah Ali Khamenei's liaison with the IRGC navy, had said, "If Washington and Tel Aviv are foolish enough to even consider attacking Iran, our initial response would be to target Israel and set US interests in the Persian Gulf ablaze." The Pentagon took no time to register this particular message. The next day, the USS Abraham Lincoln was moved to the Arabian Sea.

Well, the Lincoln was moved -albeit for air support for the troops in Afghanistan, so take Mr. Escobar's analysis however you will 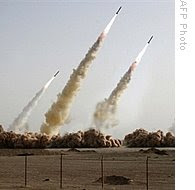 MissileThreat.com on the Shahab 3 here:

The Shahab-3 is a medium-range, liquid-propellant, road-mobile ballistic missile. Its range is sufficient to target Israel, Turkey, the Indian subcontinent, and US forces stationed in Iraq, Afghanistan, and the Persian Gulf. The missile's low accuracy means the missile would probably only be usable to attack civilian populations and has no military application other than simply holding enemy populations hostage. The Shahab-3 may also be known as the Zelzel-3, although this has not been verified.1

Of course, accuracy is not essential in horse shoes, hand grenades and nuclear weapons... 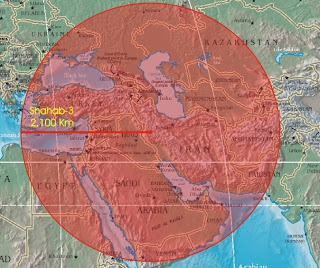