Last time we visited this topic, here, an essential element of accurately aiming long range ship guns was discussed - optical range finders. The ability to get accurate ranges was vital to aiming ship weapons - but ranges were only part of the mathematics of accurate gun fire control.

Knowing your own ship's speed was also vital - and the collection of that information became easier with the invention of the "pitometer log" in the 1890's. A pitometer log is a device that measures a ship's speed.

Another invention of the 1890's was the electrically powered ships gyroscope:

A gyroscope will always point to a fixed point in space if left undisturbed. If force is exerted upon it, it will react at right angles to the force applied. This characteristic of a gyro combined with other elements of precession, pendulocity and damping will allow the gyro to settle toward true north. In 1908 Dr. Anschutz patented the first north seeking gyrocompass with the United Kingdom's Patent Office (Patent Number 10382/08). That same year, Elmer Sperry invented and introduced the first ballistic gyrocompass, which included vertical damping (his device was subsequently patented with the British in 1911 - Patent Number 15669/11). Both of these first devices were of the single pendulum type.

And, with the gyroscope, came the first "full gun battery fire control system"

During this period Admiral Joseph Strauss, Chief of Naval Ordnance, encouraged Sperry to examine the basic fundamentals of fire control problems faced by ship borne long range guns. From this beginning, the Sperry Gyroscope Company developed the first full gun battery fire control system, which were ultimately placed aboard every U.S. battleship during World War I (some 30 ships).

Thus, the key elements for targeting came together: (a) range, (b) speed and (c) true compass direction. From range finders and bearings calculations cold be applied that gave the target's range, speed and course (see here). Further calculations could provide an estimate of where the target will be in the near future so that guns can be brought to bear and set to hit that projected spot (like leading ducks when you are hunting - except duck hunters use experience to calculate the lead distance). Of course, one has to calculate where your own ship will be at the projected time of firing and allow for other factors like the "Coriolis effect", weather effects on the air, and other adjustments."

All this calculating takes time - time you don't have in combat. So, several great minds addressed the problem by developing mechanical calculators into which the relevant information was entered and from which spat forth firing solutions. See here and here for discussions on the Royal Navy's Dreyer Fire Control Table:

The addition of director 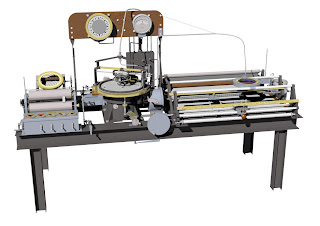 control facilitated a full, practicable fire control system for World War I ships, and most RN capital ships were so fitted by mid 1916. The director was high up over the ship where operators had a superior view over any gunlayer in the turrets. It was also able to co-ordinate the fire of the turrets so that their combined fire worked together. This improved aiming and larger optical rangefinders improved the estimate of the enemy's position at the time of firing. But with the longer practical ranges came the increased time of flight. The Fire Control System now had to account for more variations and more complicated corrections than was originally planned. The Dreyer Table had some mechanical flaws, particularly when additional loads were introduced but on the whole performed in a satisfactory manner. The system was eventually replaced by the improved "Admiralty Fire Control Table" for new build ships after 1927, although Dreyer Tables went to war a second time in World War II, notably amongst Britain's unmodernised battleships and battlecruisers.

For those with the patience, The Dreadnought Project has some video simulations demonstrating the operation of a Dreyer table and subcomponents here.

You should be getting the idea - longer range guns require a lot of data to be fired accurately. The British has one early solution to assembling the necessary information. The American Navy had ...well, the American Navy had an inventor named Ford - Hannibal Ford.

Mr. Ford once worked for Sperry but set up his own shop to address the gun control issues facing the Navy. As set out in this excellent article:

In 1915. Ford resigned from Sperry to organize his own company, the Ford Marine Appliance Corporation, which became the Ford Instrument Company in 1916 ... The company’s mission was to develop and sell fire-control systems to the US Navy. Its first product, Range Keeper Mark 1, was introduced into the US Navy in 1917 on the USS Texas. 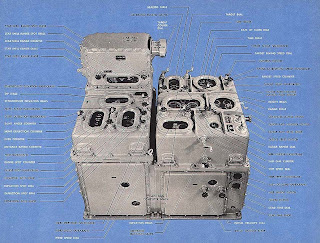 2. By integration of range rate it determined present
range.
3. It generated the relative speed at right angles to the line of sight” but not the present target bearingangle.‘”

But in a world in which war was growing faster, gufire control systems were still very dependent on human input. Not until the late 1930's was more automated input developed. Just before the U.S. entered World War II, Hannibal Ford produced a break through device - the Mark I Gunfire Control Computer:

The system included transmission of data to and from the computer below decks by means of synchros. Designed originally for the 5-inch/38 guns, it was soon modified by Ford Instrument Co. for a number of other guns and ammunition types as well.

One was a device called a Selsyn which was developed about 1925. This was the first really good device that could transmit and receive electrically the mechanical position of anything.

The other device that was really important was the mechanical rate integrator. With this device, time and position, for the X, Y and Z axes, could be integrated together.

Integrating time and position together with the other components of the FC problem could predict a future position.

This put Ford Instrument Co. and the USN on the road to producing the finest FC System of the time.

At this time all of the equations and formulae were well known that were necessary to solve the FC problem to the target. This was incorporated into the Mark 1 computer.

As I understand it, the original Mark 1 computer could solve only the X and Y coordinates of the FC problem.

More about the Selsyn. 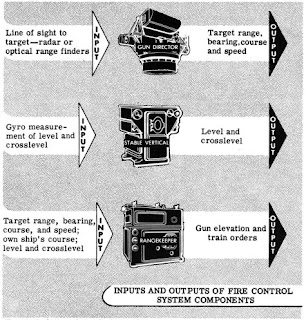 How it fit together, summed up here in a description of the working of the Mark 1A:

The Relative Motion Group combines the motions of OwnShip and Target into three rates of Relative Motion in relation to the Line of Sight, Elevation Rate, Deflection Rate, and Range Rate.
The Integrator Group uses these rates to generate changes of Target Position in Range, Elevation, and Bearing. These changes are continuously transmitted to the Director to position the telescopes and the Range Finder.
If the generated values of Target Position do not keep the sights on the Target, the operators in the Director press their Rate Control keys and turn their handwheels to keep the sights on the Target.
Turning the handwheels with the Rate Control keys closed sends Rate Control corrections to the Rate Control Group in the Computer.
The Rate Control Group applies these corrections to the values of Target Motion and sends the corrected values back to the Relative Motion Group.
The Deck Tilt Group computes the correction necessary to convert Director Train in the deck plane to Relative Target Bearing in the horizontal plane. 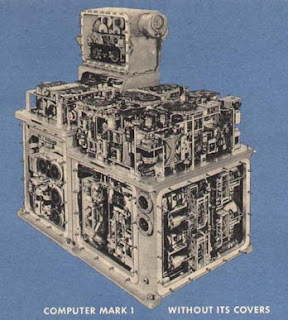 For the most part, except for the 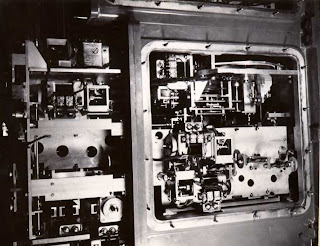 technicians needed to repair the Mark 1A, the interior workings of the computer probably didn't matter any more to the operators of the machine than do the inner workings of the computer I am typing this on do to me. As you can see from the adjacent photos, the computer was a maze of gears and wheels. If you are interested in more specifics I suggest taking a look at this site maintained by the Historic Naval Ships Association. 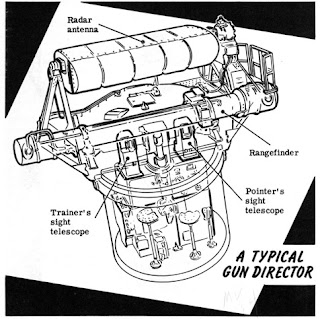 However, the net effect of the Mark 1A computer, especially when coupled with radar input, was to greatly increase the accuracy of the gunnery of U.S. Navy ships. In other words, Hannibal Ford's lead to this:

The Computer Mark 1A computes continuous gun orders containing corrections for all the significant factors affecting antiaircraft and surface fire. The corrections allow for motion of own ship and target during the time the projectile is in flight; for the curvature of the projectile path caused by gravity, drift, and wind; for pitch and roll of the ship; and for a number of other factors.

These gun orders, a fuze-setting order, and parallax corrections are continuously transmitted from the computer to the gun mounts. At the mounts, these orders are used to point the guns continuously, and to time the fuzes so that the projectiles will explode at the predicted position of the target.

Modifications of Computer Mark 1A have been developed to control the various calibers of dual-purpose guns in use in the Fleet. All modifications are essentially the same in appearance, function, and operation. They differ mainly with respect to the self-contained ballistic data which adapt them to a particular gun. 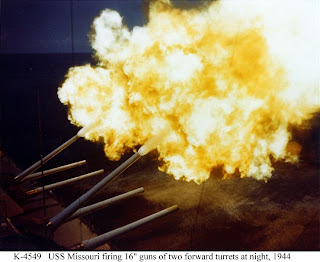 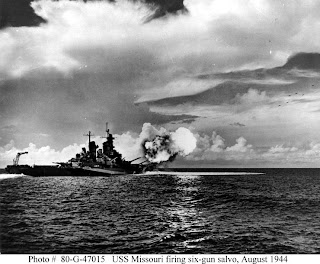 Translation: The Mark 1A automated the calculations necessary put shells on target. The electrical circuits and mechanical devices connected to the computer allowed the gun mounts to essentially be fully automatic.

These analog computers served well past WWII and into the 1970's, despite their weakness - they were too slow to keep up with modern high speed aircraft.