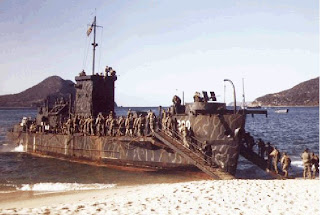 When last visited, Lieutenant Commander John H. Morrill had made good an escape from the Japanese capture of Manila Bay to Australia with 17 members of his crew in an open 36-foot motor launch, as set out here and here. He probably had enough "hero points" to leave the war zone and do war bond tours for the duration.

Fortunately, neither the war fighting U.S. Navy nor the Japanese had not seen the last of J. H. Morrill.

Now, as CDR Salamander and I have both discussed here and here, during the war the Navy produced a collection of inexpensive "Landing Craft Support" ships. What neither Salamander or I touched on was the creative development of the LCS from the original "Landing Craft Infantry" (LCI) design (see here). The LCS was not the only variation on the LCI - there were several iterations:

* LCI(R) - Rocket; a platform for six 5-inch rocket launchers. This platform was rather unsophisticated as the rockets were static mounted and the ship had to be manoeuvered to aim the rockets. At firing time the crew proceeded below decks to escape the commotion caused by the rocket engines firing.
* LCI(G) - Gunboat; two 40 mm guns, six .50 inch machine guns and ten MK7 rocket launchers added to the existing armament
* LCI(M) - 4.2 in Mortar was dismountable for naval use and amphibious deployment
* LC(FF) - Flotilla Flagship

The LCI(G) variant was used for the basis of the LCS(L) class of Landing Craft Support ships. The same hull was used and more armament was added, but the troop carrying capability was removed.

The Landing Craft Support (Large) or "LCS (L) Mark 2" was the same vessel as the LCI(S) but intended for use as a support vessel to provide firepower alongside other landing craft and was not to being beach but carried extra armament. The LCS(L) Mark 1 had carried a tank turret complete with its QF 2 pounder gun but for the Mark 2 this was replaced with a tank turret mounting the QF 6 pounder gun. To this was added two oerlikon 20 mm cannon and two 0.5 inch Vickers machine guns. Ten were built in all.

What does this have to do with Morrill? Explained here:

LCI Gunboats played a decisive role in protecting the American airfield at Peleliu from 25,000 Japanese in the northern group of islands. The front was a thin line of LCIs strung across the coral reefs just twelve miles north of the airfields. 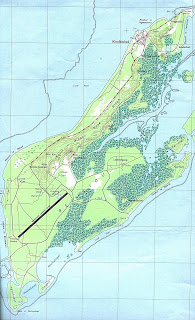 These LCIs were under combat conditions for more than six months, shooting up mines, rafts. barges plus fighting off attacks by parties of Japanese swimmers. It was physically possible for the Japanese to wade at low tide on the coral reefs from the north, then swim the last 50 yards into Peleliu. LCIs and Marine fighter-bombers broke up the attempts. 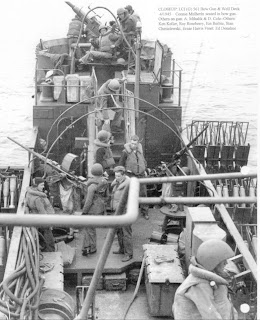 A legend came out of this bitter daily struggle: Capt. John H. Morrill of Minneapolis....

Morrill entered the U.S. Naval Academy 31 July 1920 and graduated in 1924. He had duty in battleships, cruisers, destroyers, minesweepers, minelayers and ten years in S-Boat submarines. He may be the only career naval officer who EVER requested duty in LCIs.

The Skipper of the LCI Flotilla Flagship... said,"The Commodore never asks a man to do anything he wouldn't do himself. He leads all the raiding parties ashore." his men idolized and respected Morrill. 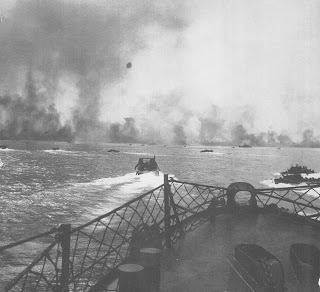 During the Palau "by pass", fifteen or twenty LCIs were stationed each night in a semicircle around Eil Malk to seal off the reef approaches. They bombarded the shore line and kept a sharp lookout for Japanese swimmers. ..
In the Kansas City Star article, Morrill said, "Our job is to keep them back from the shores... it's a type of warfare that requires knowledge of the tides, the sea and the weather."
***
Capt. Morrill described an attack on LCI 730 when 35 swimmers came toward then with 100 pound aerial bombs on rubber rafts. Searchlights picked them up and were dispatched but one was captured.
***
Known as the "Black Cat" Flotilla their mascot was Midnight, a coal black female cat greatly pampered by the crew. The other mascot is Elsie, a brown, terrier-like female dog. Captain Morrill believed black cats were lucky. What pride in having served in that unique Flotilla 13 ... the Black Cats.

John H. Morrill II retired from the U.S. Navy as a Rear Admiral.

The reason for the emphasis on Morrill volunteering for LCI duty is because of the "career" Navy view of the amphibious force:

For the most part, the "amphibious force" was considered a "disposal school for ensigns." "Assignment to an amphibious craft was merely a ticket to the battle zone with no return - that the crews and the craft on which they served were the expendables of the new war." According to some, the amphibs were the Siberia of the Navy.

No wonder the crew of Flotilla 13 loved a skipper who thought of them as fighting men and not prospective casualties of war!

A more personal tale can be found here:

[O]ur LCI was stationed in a natural deep water lagoon off the island of Peleliu. We were a “gun boat,” designed to come close to shore and fire “grass cutters” – bombs that would hit the Japs just behind the shore where they were hiding to fire on our men as they were coming ashore. Our LCIs had no names, only numbers. We were the flagship of “Flotilla 13,” the lucky “Black Cat Flotilla.” Our orders were to stop the Japanese from infiltrating from the surrounding islands. We did a pretty good job of it. We had destroyed barges carrying the enemy, low in the water, or spotted them for the Marine pilots to destroy.
***
1944 there had been no more attempts to infiltrate for some time but we stayed vigilant. Every night we had the OD and two lookouts on the bridge. The bridge of an LCI is something like a submarine’s, being very small, only about 6’ x 6’. As the Quartermaster, I spent most of my time on the bridge as well.

Constantly scanning the water with binoculars, the lookouts were supposed to report to the OD any sightings and he had to decide what action to take.

This night a lookout reported seeing something in the water, and the OD ordered our search light turned on. Then all hell broke loose!

There were dozens of Kamikaze swimmers in the water, all wearing yellow caps (we found out the significance of that later). They all had grappling hooks and bamboo poles and some of them were pushing rafts of bamboo loaded with explosives.

Their objective was two-fold; to board the ships silently and kill the crew (whom they assumed would be sleeping) and to place the five hundred pound bombs under the sterns of the LCIs and blow them up. All of the swimmers had large sashes tightly bound around their waists to protect them from the blast of the bomb going off.

The problem was that many of the kamikaze swimmers were too close to the boats for our 20mm and .30 calibre guns to be leveled at them.

Our shouts brought the entire crew topside and everyone started shooting at the swimmers with their .45’s. It was like shooting clay pigeons. Those further away were dispatched with the machine guns. We also had to be careful not to hit any of the other LCIs close to us.

In the middle of this chaos, one Japanese had managed to hide behind our LCVP, which was tied to the stern. When all the swimmers had been killed or driven off, we discovered this lone Japanese. The “old man”, Captain Morrill (John Henry) yelled "“hold fire”" and we brought him on board.

He was pretty scared, and probably pretty happy, too. There was no question of talking to him as he had no English and none of our guys spoke Japanese; but we gave him coffee and cigarettes and he bowed a lot, I expect to say.