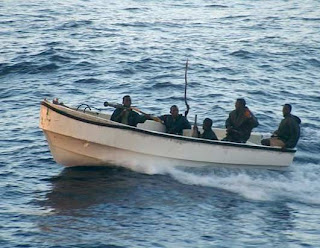 Or, as headline says, "Somalia: Pirates in Total Defiance of the UN":

It is barely two weeks after the United Nations Security Council members unanimously adopted a resolution to combat the attacks and hijacking along the coastlines of Somalia, pirates have vowed to shoot down the resolution.

The gangs have said that due to the fact that Somalia is not a member of the Security Council, it would be wrong for the country to agree to such a resolution which the pirates say is a clear breach of the sovereignty of the Horn of Africa country. The gangs mainly have their main bases in the northeastern regions of Somalia, known as Puntland.

The pirates have vowed to resist any move by any Security Council member to invade Somalia, saying such a move would be tantamount to breaching the sovereignty of the conflict-ridden nation.

It is however interesting that piracy along the Somali coast acts as a source of economic upkeep catering for a large population of people mainly the jobless residents.

The militias who are a result of lawlessness and unemployment have vested their energies in hijacking ships and vessels in the Indian Ocean waters for huge ransoms.

Mogadishu hosts at least four distinct groups of pirates, organized along clan backgrounds and are led by warlords, corrupt business people and even the town's local authorities.

According to sources privy to the ongoing in Mogadishu, Somali soldiers have allegedly joined forces with the pirates making the work of dealing with them even more difficult.