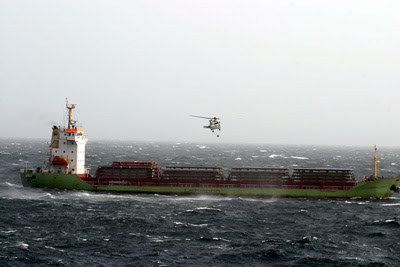 According to this, the unlucky crew of the ship Lehmann Timber (captured by pirates, ransomed, adrift at sea after an engine failure, rescued by USS Momsen) has been towed safely into port in Oman.

The U.S. Navy has released photos of the assistance rendered:

An SH-60B Seahawk assigned to the "Saberhawks" of Helicopter Anti-submarine Squadron Light (HSL) 47, embarked aboard the guided-missile destroyer USS Momsen (DDG 92), takes supplies to the German cargo ship MV Lehmann Timber after the ship suffered engine problems and became stranded in a storm. Momsen is providing food and water to the ship until a tug arrives. Pirates recently released the crew of the Lehmann Timber after the owners paid a $750,000 ransom. Momsen is deployed to the U.S. 5th Fleet area of responsibility supporting maritime security operations. U.S. Navy photo (Released) 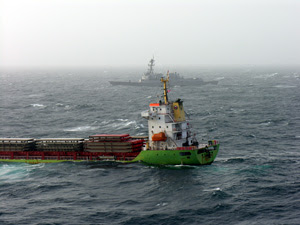 USS Momsen (DDG 92) and its embarked helicopter detachment provides assistance to Motor Vessel Lehmann Timber after it experienced a main engine casualty leaving it unable to operate at sea. Assigned to Combined Task Force (CTF) 150, Momsen is providing food and water at sea to motor vessel’s crew, who were recently released by pirates.

UPDATE: In a related press release, Lloyd's insurance market has a pirate related note, "Protecting against the modern-day pirates":

As levels of piracy rise, so ship owners can expect insurance premiums to go up, with Ken Alston of risk specialist Marsh saying this was an eventuality to be ‘expected’. He added that the scale of the additional premium being charged at the moment is ‘unlikely to have an impact on the consumer’ but if the number of incidences increases, this may change. In May 2008, the Joint War Committee added the Gulf of Aden, located between Somalia and Yemen, to a list of places at high threat of hull war, strikes, terrorism and related perils. It is now comparable to the likes of Iraq in terms of insurance risk, according to the committee.