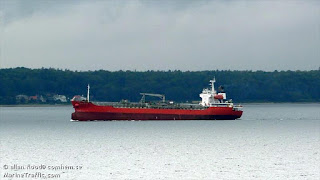 Early report and not much in the way of details, but there is this from NATO Shipping Center Daily Piracy Update:


The M/V LIQUID VELVET, the previously pirated vessel that may have been used as a mothership, was disrupted by naval Counter Piracy forces in the evening of 10 January. This mothership is no longer considered a threat to merchant shipping.

I expect more details will be forthcoming. Should be interesting reading. UPDATE: Looks like a blocking move by a Royal Navy force as set out here:


Fort Victoria, which is operating as part of Nato’s Operation Ocean Shield in the Indian Ocean, cut off the vessel’s progress when it was 90 miles from the coastline and forced it to return to Somalia. Fort Victoria approached the Liquid Velvet under cover of darkness, before circling the vessel at speed. The ship’s Lynx helicopter was also used. Fort Victoria then followed Liquid Velvet as she retreated towards Somalia.