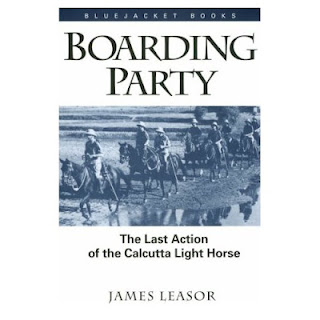 Actually, the book is Boarding Party by James Leasor, an inexpensive Kindle reader book at about $4. The Amazon description of this 1978 book:


. . . [T]his is the story of the undercover exploit of a territorial unit. The Germans had a secret transmitter on one of their ships in the neutral harbour of Goa. Its purpose was to guide the U-boats against Allied shipping in the Indian Ocean. There seemed no way for the British to infringe Goa’s Portuguese neutrality by force. But the transmitter had to be silenced. Then it was remembered that 1,400 miles away in Calcutta was a source of possible help. A group of civilian bankers, merchants and solicitors were the remains of an old territorial unit called The Calcutta Light Horse. 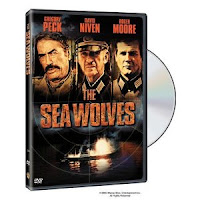 All the stuff of good fiction in a true story. Spies, a vital secret mission, great daring by a gaggle of middle-aged guys.

Made into a movie, The Sea Wolves, which I commend you watch only after reading the book to see the liberties taken with the story and also only if you enjoy seeing what must have been the last gasps of some major movie actors like Gregory Peck, David Niven, Trevor Howard and others. Features Roger Moore, too. If you are a member of Amazon Prime you can watch the movie at no additional cost, which was the right price as far as I am concerned. Still, a good tale of a nearly forgotten event in a nearly forgotten theater of WWII.
Posted by Mark Tempest at 2/10/2012 08:28:00 AM