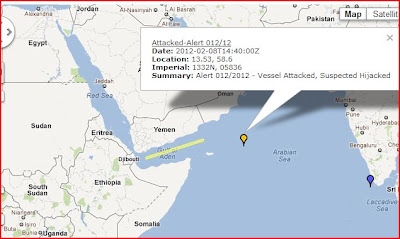 And reports of a hijacking (could be the same one) here:

Neptune Maritime Security received information via credible channels that the vessel, MV FREE GODDESS (IMO 9107045), has been successfully hijacked by Somali pirates. According to the report Neptune received, the Liberian-flagged bulk carrier came under attack on February 7, 2012, in position 16.03N 062.26E (approximately 520nm NE of Socotra Island) at around 1500 UTC from an unknown number of pirates. *** The last known positional data on the Free Goddess is that she has dramatically altered course and her last recorded position was 11.59N 056.09E at 090533ZFEB12, approximately 110nm south east of Socotra Island.