From the U.S. Department of State: "Expanding Private Sector Partnerships Against Piracy":

Yet we must also recognize that best management practices do not guarantee security from pirates. Pirates operate in too large of an area for naval forces to respond quickly. The reality is that international naval forces simply might not be there to respond. The problem of piracy is one that can’t simply be solved by national governments. Therefore, we have also supported industry’s use of additional measures to ensure their security – such as the employment of armed security teams. To date, not a single ship with Privately Contracted Armed Security Personnel aboard has been pirated. Not a single one.

These teams serve as a potential game-changer in the effort to counter-piracy. This is because – and as anyone in the Navy or Marines can tell you – one of the most difficult combat maneuvers to undertake is to board a ship when coming under fire. While many expected these teams to be made up of undisciplined “cowboys” that would increase the violence at sea, from what we have gathered and observed the opposite has happened. We have not seen cases of pitched battles at sea between armed security teams and pirates attempting to board under fire. In fact, in most engagements between armed security teams and pirates, the situation ends as soon as pirates are aware these teams are on board. We have found these teams to be highly professional. In most cases, as pirates approach a ship the armed security teams will use flares or loudspeakers to warn the pirates. If the pirates keep coming, they will fire warning shots. That is usually when the interaction ends. Pirates break off the attack and turn their skiffs around and wait for another less protected target.

At the State Department, we have encouraged countries to permit commercial vessels to carry armed teams. However, we do note that this is a new area, in which some practices, procedures, and regulations are still being developed. We are working through the Contact Group and the International Maritime Organization or IMO on these issues. For instance, we have advised that armed security teams be placed under the full command of the captain of the ship. The captain then is in control of the situation and is the one to authorize the use of any force. Last September, we were encouraged to see language adopted by the IMO that revised the guidance to both flag States and ship operators and owners to establish the ship’s master as being in command of these teams. 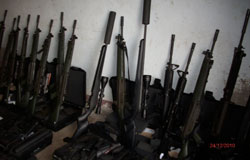 There have been some logistical and technical issues that have arisen with armed security teams – particularly relating to weapons licensing and the transit of these teams through third countries. The United States regularly works with other governments to help resolve questions on weapons licensing to facilitate compliance with the laws of individual port States as related to firearms transfer. We engage through the Contact Group and the IMO to encourage all port and coastal States to adopt legislation that is conducive to smooth, facilitated movements of security team firearms and equipment. Currently, some States present challenges in this regard by requiring transfer to a third party while a vessel is moored in a port. Others impose fee schedules that directly charge against the presence of these weapons. In response, we have demarched port and coastal States and let them know that U.S. vessels may have firearms onboard and we request that these teams and their firearms be facilitated under applicable laws. We have also worked with the Coast Guard and Department of Transportation at the IMO and through the Contact Group to further encourage port and coastal States to develop regulations that facilitate the use of these teams aboard commercial vessels. We are working hand in glove with industry in all these endeavors to ensure these teams are both properly regulated and properly equipped.