The U.S. Navy and the Persian Gulf: Ramping up slowly 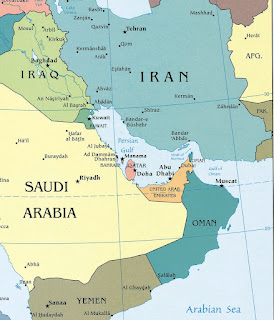 Iran rattles sabers and the U.S. Navy does a slow ramp up. L.A. Times reports, "Navy says it will add ships to Persian Gulf amid Iran threats":

The U.S. Navy is upgrading its defensive and offensive capabilities in the Persian Gulf to counter threats from Iran to seize the Strait of Hormuz and block the flow of oil, the chief of naval operations said Friday.

Greenert said he plans to assign more patrol craft to the gulf, possibly armed with Mark 38 Gatling guns. The same kind of guns might be placed on ships that provide protection for U.S. aircraft carriers or perhaps on the carriers themselves.

U.S. ships have excellent long-range defenses but could use weapons for closer combat, Greenert said.

"It’s like being in an alley with a rifle and maybe what you need is a sawed-off shotgun," he said.

The Iranians have boasted that they could "swarm" large U.S. ships with their smaller, fast-moving craft. They have also reportedly been laying mines along their coastline.

My guess, which is exactly that, is that the mine-sweeping stuff is for cleaning up the mess after the "AirSea Battle Concept (ASBC) (modified)"  gets a test run. There is almost no better geographic area to do a little joint air-sea work out.

Or, if required to bust some sort of Iranian attempt to close the Strait of Hormuz in an effort to effect access denial to the Persian Gulf.

This is no rush to war, but a sensible response to the known capabilities of the Iranian forces.