A suggestion of a potential area of expansion for the pirates of Somalia, should they decide to venture further into the open ocean using their "mother ships" is found at "Piracy: Cape to Arabian Gulf and Malacca Shipping Lanes Are Latest Targets", which builds off an early February 2012 hijacking:

The hijacking comes on the same day that a maritime security company whose services include the provision of armed guards on ships warns of “a critical shift in pirate focus.”

GoAGT (Gulf of Aden Group Transits) said on Thursday that over the past week it has received first-hand information from sources indicating that several Pirate Action Groups (PAGs) have begun to focus operations in a new regional area. These sightings suggest that pirates are targeting the Cape to Arabian Gulf shipping lane.

“There is a potential for PAGs to move east and endanger shipping along the Cape to Malacca route,” added GoAGT. “Shipping along these routes are vulnerable as many vessels are not hardened against piracy, and do not carry armed guards. This is due to these routes being outside of the traditional High Risk Area (HRA).”


GoAGT says the activity east of the Seychelles is “likely motivated by the search for unprepared shipping. The operational range for PAGs has greatly increased due to the use of mothership vessels, which allow for extended operations at sea. It is also possible that PAGs can extend operations south of the Maldives.” “On 6 February,” says GoAGT, “a merchant vessel was approached by two skiffs in the central Indian Ocean Region at position 05°03'N 066°07'E. On 8 February, a second merchant vessel was attacked at position 04°18'S 059°59'E by a skiff with five pirates on board (POB). The distance between these attacks suggests that several PAGs are now operating in this area. “With the extensive concentration of anti-piracy measures in the Northern Indian Ocean, it is increasingly likely PAGs will attempt to target new areas to take advantage of unprotected shipping lanes,” warns GoAGT.
***
Nato said piracy activities have been recently reported in the Indian Ocean in vicinity of the Seychelles Islands and warned that approaches occurred on 28 January north of the Seychelles Islands in position 0455N 05814E and on 6 February east of the Seychelles Islands in the position of 0503S 06607E. “Masters are advised to proceed through these areas with extreme caution, and be advised that the PAG (Pirate Attack Group) responsible for the recent approaches (NSC4) in the Indian Ocean is still believe to be in the area.”

Okay, GoAGT might be attempting to drum up a little business, but its point is well made. Somali pirates have shifted their attacks to areas in which coverage by naval forces has been weak or non-existent and to locales where the perceived need for shipboard armed security teams has also been low. It is logical that the pirates might shift to a sea lane which, as yet, has not been bothered by pirate attacks.

What virginal sea lanes that are within the potential reach of the Somali pirates are in danger?

What follows is a mashup chart I created by combining a chart from a study of "The complex network of global cargo ship movements" by Pablo Kaluza, et al. with a recent IMB Live Piracy Map showing attacks to 4 March 2012 in the Indian Ocean area:
If it looks a little fuzzy, It's because of the overlay of the maps to allow me to make my point - there a number of heavily traveled sea lanes radiating (roughly) from South Africa to India, to the Strait of Malacca and to other points in eastern Indian Ocean. Given enough of a mothership, these areas are potentially vulnerable to pirate attacks, though, to date, none has occurred along them.

Here's another liberty I have taken from the Kaluza, et al piece, in which the green oval I have added highlights the area of concern:

Having a hypotheses of a potential area of attack - and one that covers a vast area of ocean at that- what is a viable way of providing some protection for these as yet "un-pirated" sea lanes? 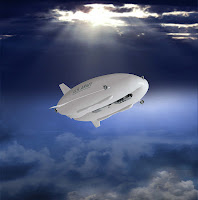 One thought is to use modern airships as counter-pirate tools, as set out in an earlier pos,  Fighting Pirates with Airships, an idea apparently being examined by the Royal Navy. Another possibility is to keep the Somali pirates out of these sea lanes by a vigorous containment policy, though ultimately there has to be a "risk/reward" look at the potential which ways the costs of prevention of hijackings against the cost of paying ransoms.
Posted by Mark Tempest at 3/06/2012 09:24:00 AM