Well, if the Somali pirates read der Speigel, they will know how far to nest off the beach, as set out in here, that distance is 2 klicks/km or 1.2 miles:


Last Friday, EU foreign ministers meeting in Brussels agreed to expand the operation to include the coastal region. According to information obtained by SPIEGEL ONLINE, the ministers agreed that Atalanta units should be able to target pirates and their infrastructure up to a limit of two kilometers (1.2 miles) inland. If the expansion is approved, it will be the first time that Western forces are allowed to target pirates on the Somali mainland. 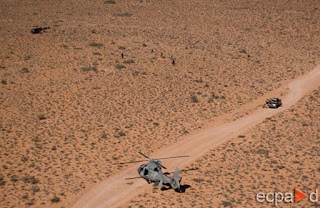 The last sentence is not entirely accurate. It is clear that France took forces ashore to whack some pirate thugs 4 years back (see here and here), the U.S. has, on occasion, gone inland to rescue hostages (see here, and there are - rumors - that other countries have had forces doing stuff off the water.

Still, 2 km is progress of sorts in taking the counter-piracy op ashore. In an earlier report in which the Germans revealed "consideration" of taking the fight ashore (see here), there was this whining noise:


Omid Nouripour, the defense spokesman for the Green Party's parliamentary group, was even more outspoken. He called the idea of targeting the pirates' onshore facilities "sheer madness." He spoke of the danger of mission creep should the pirates retreat further onshore in response to attacks.

And my suggestion of a suitable strike distance - somewhat deeper than 2 km:


Someone ought to explain to Omid Nouripour the difficulties imposed on the pirates by making them perform logistics 100 miles from the beach.