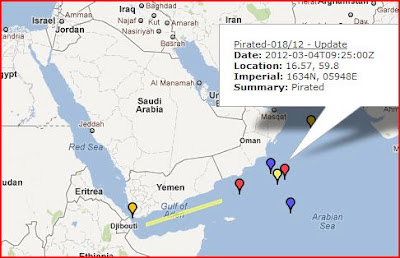 
There has been an increase of piracy related activity over the past two weeks in the High Risk Area (HRA), especially off the coast of Oman. At 1201Z on 03 March 12, a merchant vessel sighted a suspicious group of skiffs in the vicinity of 2127N 06237E . One of the skiffs followed the merchant vessel for approximately 2 hours despite the merchant vessel taking evasive action. (NSC Alert 10/12)

Actually, the culmination of the increased activity is a highjacking on 4 Mar 2102:

We have received reports confirming this vessel has been hijacked and was in position 1634N 5948E.


A maritime security alert has been issued for the Arabian Sea after a merchant vessel, MV Royal Grace, was reportedly hijacked in position 21:27N - 062:37E approximately 150NM off Oman on March 2, reports GAC Protective Solutions.

According to the Equasis data base, the 6,813 dwt, Panama-flagged, Royal Grace was built in 1984 as a Chemical/Oil Products Tanker and is managed by Oyster Cargo & Shipping LLC. The owner is Snow Whyte Energy Ltd., which uses the same Dubai address as the manager.