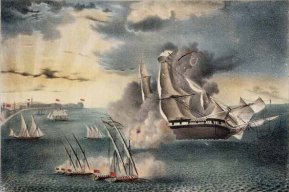 There is an echo that regular listeners to Midrats are very familiar with; the critical importance of an understanding of history in the profession of arms.

More than almost any other field, there is nothing new under the sun. The tools may change, but the play of power, economics, intellect, and drive which makes the difference in war and therefor human history remain the same.

A professional must reach back to Sun Tsu and Alexander the Great ... but he must also look closer. 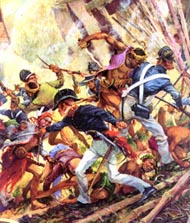 To discuss for the full hour will be returning guest LCDR Benjamin "BJ" Armstrong. He recently returned from deployment as the Officer-In-Charge of an MH-60S Armed Helo Detachment which conducted operations with the BATAAN ARG and 22D MEU in support of Operation UNIFIED PROTECTOR in the 6th Fleet AOR and maritime security/counter-piracy operations in the 5th Fleet AOR.

When BJ isn't off playing helicopter pilot, he is an occasional naval historian. His research extends over the subjects of naval history and irregular warfare. He is the author of numerous articles including "The Most Daring Act of the Age: Principles for Naval Irregular Warfare" in The Naval War College Review, and "Nothing Like a Good Maritime Raid" in USNI's Proceedings.

His article "Immediate Redress: The USS Potomac and the Pirates of Quallah Batoo" is forthcoming in the May issue of Small Wars and Insurgencies.