One of those good ideas - from Oceus Networks Deployable LTE Solution Above the Clouds to Support Public Safety :


Oceus Networks Inc., the market leader in delivering mobile 4G LTE broadband networking solutions, announced today that it has successfully demonstrated the efficacy of a deployable 4G LTE solution on a high-altitude balloon platform, which can be used to rapidly provide broadband coverage and communications services to first responders within the first 72 hours following an emergency or natural disaster.

Accoeding to Emergency Management, the trial balloon ". . .traveled nearly 200 miles, reached an altitude of 75,000 feet, transmitted an LTE network signal that provided a 100 km radius of coverage . . ."
So, if LA experienced a disaster, you could put one of these things up and cover(roughly) the area within the yellow box on the map below. 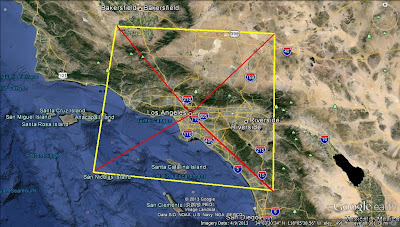 That's pretty good. You might note that "72 hour" time frame. Plan on being self-sufficient for at least that period.


Photos from here. I made the silly map on Google Earth.

As an aside, I recently received a certificate in Community Preparedness and Disaster Management from the Gillings School of Global Public Health, University of North Carolina, Chapel Hill. If you are interest in such a program, you might look here. The new CPDM Curriculum is one class shorter than it was when I took the course.
Posted by Mark Tempest at 7/22/2013 12:30:00 AM