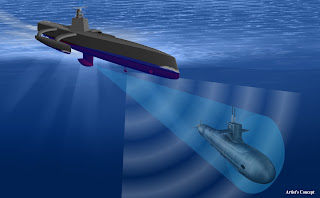 
The program is structured around three primary goals:


So, as reported in the Navy League's Sea Power magazine:


DARPA selected six industry proposals for the ACTUV concept in January 2010 for Phase 1 of the program, the concept definition phase. In August 2012, DARPA selected Science Applications International Corp. (SAIC) to design, construct and demonstrate an ACTUV prototype under the next three phases of the program under a $58 million contract. SAIC “proposed a trimaran platform: key features and innovations for the vessel, sensors, autonomy and
software. The scope of the program includes developing and testing a Remote Supervisory Control System,” Littlefield said.

In March, Raytheon Co. announced that it had been selected by SAIC to provide the sonar system for the ACTUV. The Modular Scalable Sonar System (MS3), a fifth-generation development of the company’s 30-yearold medium-frequency, hull-mounted SQS-56 sonar will have both active and passive acoustic search, detection, passive threat filtering, localization and tracking capabilities. It also will provide torpedo detection and alert and avoidance of small objects.

*** The ACTUV’s sonar will need to be autonomous, performing the difficult task of submarine tracking without an operator directing its operation. It will need sophisticated algorithms for automatic tracking, including maintaining a low false-target detection rate. The sonar also will help the ACTUV observe the rules of safe navigation applicable to any vessel at sea.

If this concept works, it will be quite the force enhancer.

UPDATE: DARPA want you to have fun exploring this concept - with its Can You Outsmart an Enemy Submarine Commander? bit, including a chance to run through a simulator.
Posted by Mark Tempest at 7/17/2013 08:50:00 AM