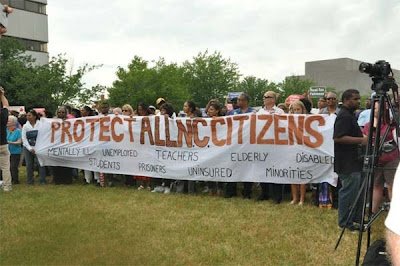 If you leave out the "North Carolina" from the headline - it's still a good question: From the WSJ, Steve Moore: "Why Are North Carolina Liberals So @&%*! Angry?". Part of his answer is even better:


So what are liberals of all stripes so angry about in North Carolina?
***
. . . the answer to my question is he and his followers are mad as hell about, well . . . everything

Mostly they seem to be angry that the NC government, after a zillion years of being in the hands of Democrats is now held by Republicans.

If you can't read the sign, it urges protection of "Mentally Ill/Unemployed/Students/Teachers/Prisoners/Uninsured/Elderly/Minorities/Disabled"

Most of them apparently "victims" of the need to balance the state budget.