I suppose that one could look at this as the federal government looking out for the interests of the citizens of states without offshore oil and gas development, or I suppose one could view it as another means of the feds grabbing money that can then be redistributed to -uh- "favored" entities. In any event, Nick Snow at the Oil and Gas Journal reports, "Administration opposes bill to share OCS revenue with coastal states": 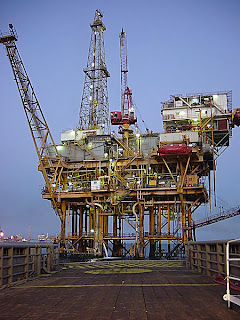 “The revenue-sharing provisions of S. 1273 would ultimately reduce the net return to taxpayers in every state from the development of offshore energy resources owned by all Americans, have significant and long-term costs to the federal treasury, and increase the federal deficit,” said Pamela K. Haze, deputy US Interior secretary for budget, finance, performance, and acquisition.

“In addition, the bill does not appear to be targeted to achieve clear conservation or energy policy outcomes,” Haze said, adding, “For these reasons, the administration cannot support the bill.”

But the bill’s sponsors—Lisa Murkowski (R-Alas.), the committee’s ranking minority member, and Mary L. Landrieu (D-La.)—countered that coastal states in general and communities in particular are asked to withstand energy development impacts without getting any of the revenue directly.

“It doesn’t make any difference if your project is one, three, or 20 miles offshore,” Murkowski said. “It still uses coastal communities’ resources, and their assets are limited. We know there will be infrastructure impacts because we can see what’s happened to states farther south.”

Landrieu said, “Whether you’re standing on the coast of Oregon, Florida, Louisiana, or Alaska, you can see oil and gas platforms and windmills generating revenue for the federal government, but not for the communities that can’t afford an emergency room at their local hospital.”
***
Cathie J. France, deputy director for energy policy in Virginia’s Mines, Minerals, and Energy Department, said, “I’m always taken aback that we have to pick winners and losers, and that there’s this false line 3 miles offshore.”

She added, “Virginia has one of the most robust ports on the East Coast. With offshore energy production—whether oil, gas, or wind—upgrades will need to be made to bring that energy to all the other states. Giving the states an unfunded mandate to do that is false and ingenuous. It has to be a true partnership to mitigate impacts on coastal communities.”

The discussion is largely academic if most of the federal OCS remains closed to energy resource development, noted National Ocean Industries Association Pres. Randall B. Luthi. “Companies invest capital where they’re allowed to work. This could divert operations to other countries,” he warned.

“It’s only by providing additional oil and gas access that this theoretical resource revenue can become reality,” Luthi said. “Congressional delegations from South Carolina and Virginia have introduced legislation to open areas off their shares. Only in Washington, DC, do we think that getting 100% of nothing is preferable to getting 60% of something.”