Somali Pirates: Ship Being Held By Pirates Sinks - Some Crew and Pirates Dead 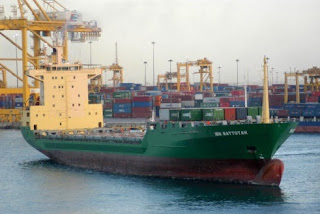 
A Reuters news report said that at least four foreign crew members and seven Somali pirates died when the cargo ship that the pirates were holding to ransom off the Somali coast sank, and 13 others were missing.

The Malaysian-owned MV Albedo cargo vessel and its crew were hijacked 900 miles off Somalia on Nov. 26, 2010 while sailing from the United Arab Emirates to Kenya.

“The ship has been gradually sinking for almost a week, but it sank totally last night,” a pirate who works with the gang said on Monday by telephone from Haradheere, Somalia’s main pirate base.

“We have confirmed that four foreign (crew) and seven pirates died. We are missing 13 in total,” said the pirate, who gave his name as Hussein. “We had no boats to save them.”

The Albedo had 23 crew from Pakistan, Bangladesh, Sri Lanka and Iran when it was seized.

Hussein said the captain had died earlier and four of the crew had previously been taken off the ship. With four dead, this would leave 14 to be accounted for, and it was not clear why there was a discrepancy with the pirates’ figures.

The EU Naval Force, a European Union anti-piracy unit that protects merchant shipping off the Horn of Africa, said the whereabouts of 15 crew were still unclear.

“EU Naval Force can confirm that the Malaysian flagged motor vessel MV Albedo, held by armed pirates at an anchorage close to the Somali coast, has sunk in rough seas,” a statement on the force’s website said.


EU Naval Force can confirm that the Malaysian flagged Motor Vessel MV Albedo, held by armed pirates at an anchorage close to the Somali Coast, has sunk in rough seas.

An EU Naval Force warship and Maritime Patrol Aircraft have closed the sea area and are carrying out a Search and Rescue operation to search for any survivors. The whereabouts of the 15 crew members from MV Albedo is still to be confirmed.

MV Albedo was the last ship being held by Somali pirates, as set out by vesseltracker.com:


Both pirates commander and EU NAVFOR mentioned m/v Albedo having mechanical problems for months, which is no wonder. Vessel in pirates captivity was as good as derelict, from the point of view of proper maintenance. To stand against storm in an open bay means either moving out to the sea, or at least, if staying at anchor, keeping vessel’s bow against swell and wind, which requires an operational main engine.