Disaster Prep Wednesday: Getting Out

Sometimes the best of all disaster preparations is getting out the way of the hazard. Or, as Ready.gov puts it, "Evacuating Yourself and Your Family":


Prepare now in the event of an evacuation.
***
The amount of time you have to leave will depend on the hazard. If the event is a weather condition, such as a hurricane, you might have a day or two to get ready. However, many disasters allow no time for people to gather even the most basic necessities, which is why planning ahead is essential.

Plan how you will assemble your family and supplies and anticipate where you will go for different situations. Choose several destinations in different directions so you have options in an emergency and know the evacuation routes to get to those destinations.

You know, planning ahead is always a good idea.

Naturally, the government provides guidelines (click on them to enlarge them): 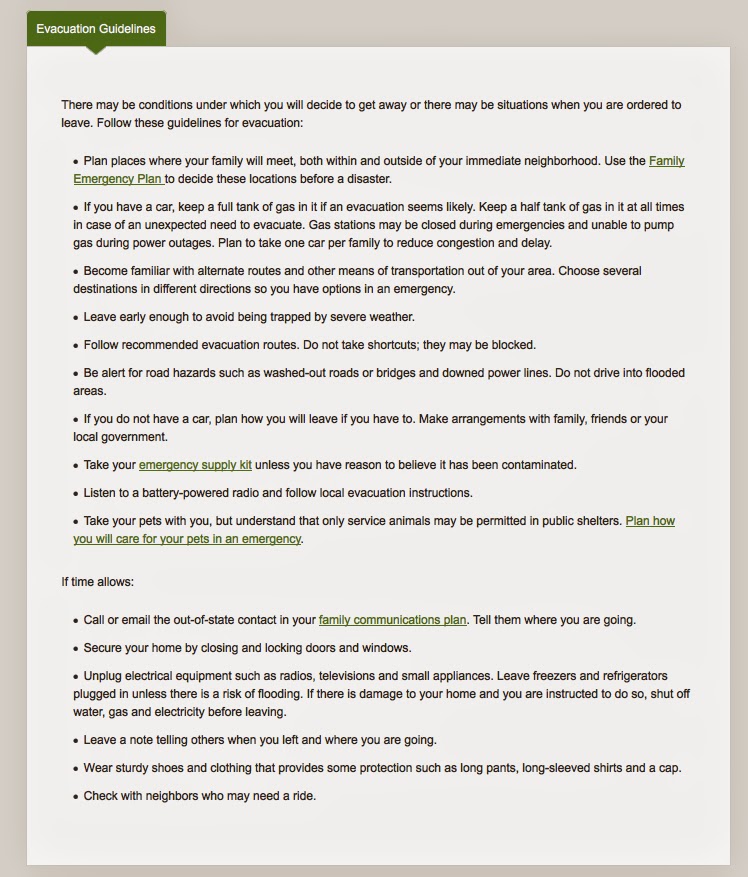 You might note the reference in the guidelines to a Family Emergency Plan which if you hit the preceding link, you will learn more about.

However, guidelines don't answer the biggest question, "When it the best time to get out?" There are folks who study such things, as seen at Evacuation modelling: finding the best time (and way) to get going where there is some research from Australia’s Information Communications Technology (ICT) Research Centre of Excellence (NICTA):


***
When to evacuate – and how – spells the difference between life and death. As we know, typhoons can cause widespread flooding of surrounding areas, and don’t just affect what lies in the path of the storm. Planning an evacuation is a game against nature.

Typhoon Haiyan (and similar events around the world) indicate that people do not play this game well … but computers do.
***
Planning an evacuation is an extremely challenging task, with calculating the best procedure akin to finding a needle in a haystack. There is an astronomic number of possible evacuation plans to consider, even for a small city.

Okay, they discuss algorithms and how to use massive amounts of data to help authorities try to control/assist citizens in evacuations:


Our algorithms have led to fundamental insights about evacuations and human behaviour. Letting every individual decide when, where and how to evacuate can have disastrous consequences.

In the Hawkesbury Nepean flood scenario, if everyone leaves at a reasonable time and goes to the closest evacuation shelter, more than 60% of the population will not reach safety and will end up trapped by major traffic jams.

It is not surprising that independent decisions by 70,000 individuals do not lead to an effective evacuation – but our algorithms evacuate every single person.

Even better, if as many as half of the population does not follow the plan exactly but leaves at the time it is instructed to, 97% of evacuees will reach safety.

Equally interesting is the fact that most existing evacuation algorithms are too optimistic: they delay the evacuation too much and, as a result, a substantial portion of the population cannot be evacuated.

After the 2005 Hurricane Katrina, the US recognised the need to go beyond situational awareness and to adapt for disaster management the optimisation algorithms used in airlines, logistic systems, and supply chains.

The "Hawkesbury Nepean flood scenario" is referenced in the article. If you want an U.S. example, you might recall the traffic jams that developed on the roads out of Houston preceding Hurricane Rita, as set out this 2005 Houston Chronicle article:

Sixteen hours to San Antonio and Dallas. Eleven hours to Austin. With over a million people trying to flee vulnerable parts of the Houston area, Hurricane Rita will be a nightmare even if Galveston doesn't take a direct hit. .

Trying to leave Houston on I-10, Ella Corder drove 15 hours to go just 13 miles today. Noticing cars out of gas littering the freeway, she turned off her air-conditioner to save fuel, but the 52-year-old heart patient worried the heat and exhaustion were taking a toll on her.

Yes, I can see a planner sitting down with a computer and coming up with a disaster evacuation plan that moves people from the most threatened areas out first, followed by the next most threatened tier, and so on. If most people comply, great! But . . .

Well, let's suppose you want to be a little more proactive - which will probably screw up the algorithms - and head out on your own at the time of your choosing. You might need some route planning assistance. USA Evacuation Routes may be useful for your planning. For example, if you were anxious to leave the District of Columbia for some reason, you can find assistance in routing here.

Not every state has evacuation routes, but there is some good stuff out there. Here's map of the New York City region, suggesting areas that ought to be evacuated in case of a hurricane: 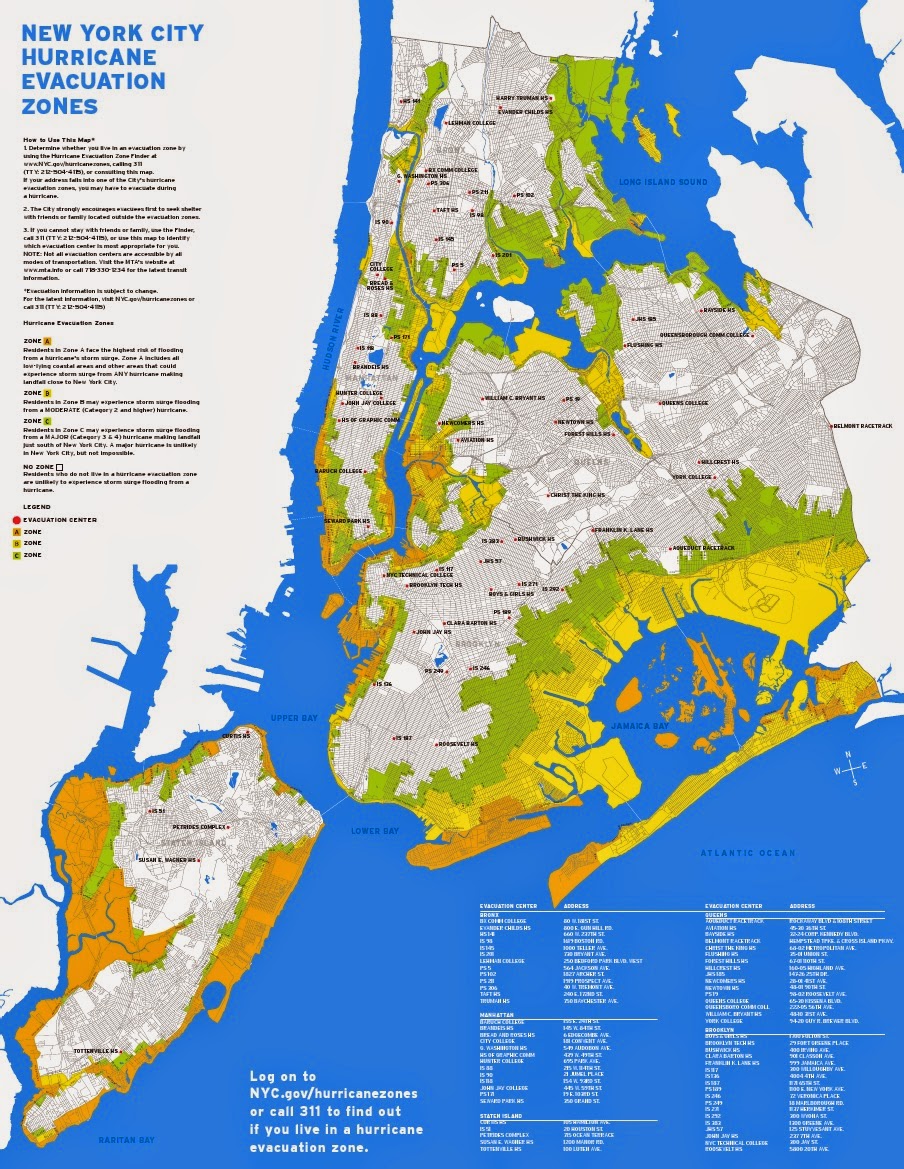 The main thing is to have a plan that includes a "trigger point" that, when reached, will set you on the way to some safe spot far away from the disaster.

Plan for money, food, shelter, water, fuel and all the rest. It is better to be pessimistic in your planning - if the "big thing" turns out to be a "little thing" it is good practice for that "worst case scenario" which may show up next. 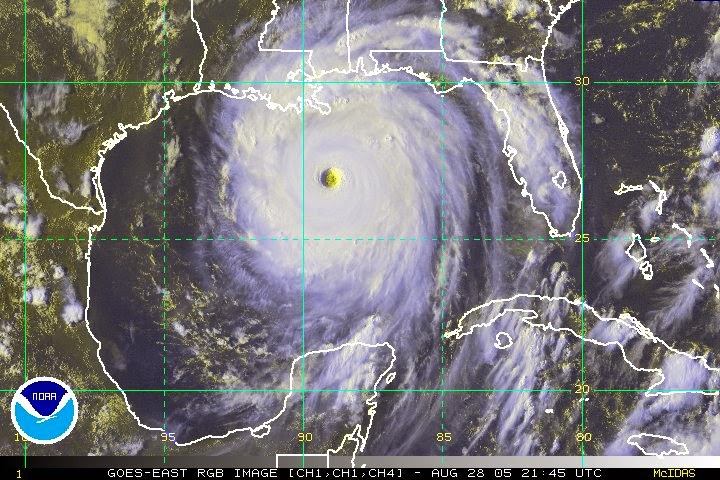