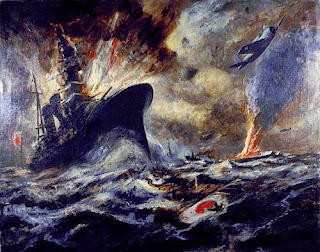 In the background of the build-up to the remembrances of the Normandy landings on 6 June 1944, it is good to take time to recall the an earlier, very important fight in the Pacific, as the Naval War College did with its Battle of Midway Commemoration featuring one of the authors of Shattered Sword: The Untold Story of the Battle of Midway, Jonathon Parshall.

Navy Live at DVIDS has the video at Battle of Midway Commemoration.

Art from the Navy Art Collection.